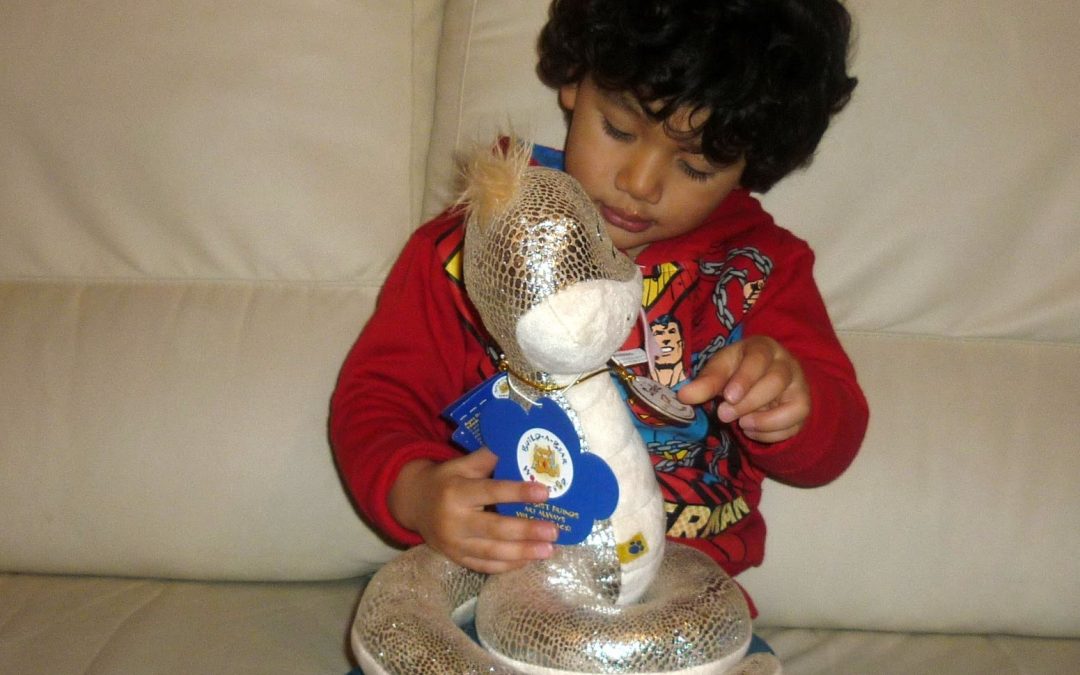 If you go by the Chinese calendar, 2013 is the Year of the Snake.  The year runs from 10 February 2013 – 30 January 2014. This year’s element is water. As the story goes many moons ago in China there was no means of telling one year from the next. The Jade Emperor decided to hold a race with animals and each year would be named after each animal that placed in the race. Snake came in at sixth place. So it’s sixth in the twelve year cycle of the Chinese calendar.  Snakes are usually viewed with much suspicion and fear but being a boy, Angelo (who’s sign is a Tiger) seems to find them interesting. For this Chinese New Year Angelo and I marked the occasion by crafting a snake puppet.  Mommy Factor saved the day by hooking us up with a  Limited Edition Snake by Build-A-Bear.

Build-A-Bear made a Limited Edition Year of the Snake cuddly to commemorate the Year of the Snake on the Chinese calendar.   I’m try to raise my children with an awareness of all their cultural heritage. So, I was thrilled to be able to gifted the toy. It’s good for the kids to learn about their heritage and cultures in a fun way. Our Build-A-Bear cuddly snake crossed a continent, from the USA, to join our family. We (well I) named him Syd.
Syd the Snake and my lil tiger, Angelo became friends at first sight.

We had a quiet Chinese New Year this year, as it was our first since the passing of hubby’s mum last year. I was at home with the kids and I decided on a craft activity. Syd, our Build-A-Bear cuddly snake is an incredible improvement to the one that Angelo and I made… okay, I’ll show the one we made earlier …. 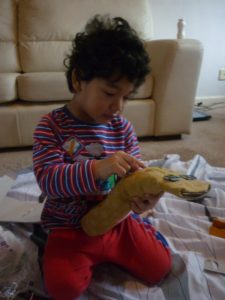 You don’t have to say it, I know what he looks like. As Angelo is only two years old, I had to incorporate music and a dance interlude to get craft activity going. It happened that Chinese New Year fell on what is Carnival Sunday in the Republic of Trinidad & Tobago (country of my birth, Trinidad). We listened to Trini Soca Music (Angelo’s a Machel Montano fan) while we crafted our snake to celebrate the Year of the Snake. It must sound strange but we like to mix it up like that in our home.

We also had story time, as I’d managed to find via another blogger, a book that explains the story behind the New Year celebrations (published by Barefoot Books, The Great Race: the story of the Chinese zodiac). I put on quite a vocal performance for that one. Angelo enjoyed the tale and the illustrations, RESULT! Later in the evening, hubby took us to a our local Chinese restaurant for a meal. It was Valentina’s first restaurant meal too! She was a gem.

So, after seeing our creation, you can imagine how thrilled I was to receive Syd. I didn’t think it was possible for a snake to be cute but Syd is adorable. He has got sweet cheeky smile… no wonder Angelo loves him! He makes certain everyone know that Syd is his snake. He gives him cuddles and sometimes watches the tele with him. 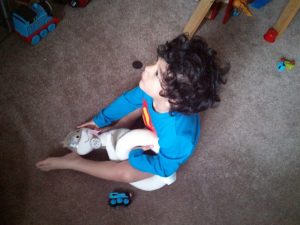 Build-A-Bear have opted to promote the positive aspects of this slithery creature from the Chinese Zodiac.  He’s gold, shiny and represents creativity and happiness and he always has luck on its side! Here’s hoping that he shares his luck with us.

Measuring 12.0 ” in height and weighting 6.0 oz, the Limited Edition Year of the Snake Cuddly will make a nice playmate for any age. He comes with a mini calendar of the twelve year cycle.

Its really forward thinking of them to have this inclusive approach to their cuddly toys. As a non-Asian mother raising two Blasian children it make me very happy.

Look out! There will be a new collection each year to commemorate Chinese New Year.

Do you know what animal you are?

I received the “Year of the Snake” as part of a cultural promotional program with Asian Black Community (http://asianblackco.blogspot.com), Build-a-Bear Workshop and The Mommy Factor (http://www.mommyfactor.net/). Since this item is only available for a limited time, it might be sold out in Build-a-Bear Workshop stores and online website. No other compensation was received. Views expressed are always 100% my own.