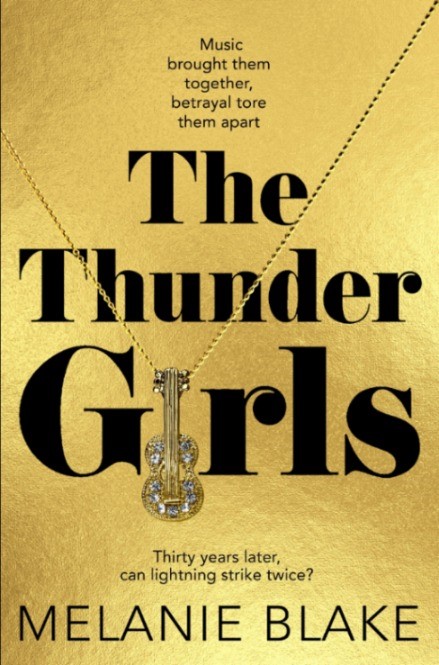 It’s the 1980s. Chrissie, Roxanne, Carly and Anita are ordinary girls with extraordinary lives. They are better known as eighties pop sensation The Thunder Girls.

This girl group is dominating the pop scene, their faces on every magazine cover, millions of fans worldwide, constantly at the top of the charts.

Until one of them brings the band’s dream run to an abrupt end. Three of their careers are over – and so is their friendship.

Fast forward thirty years. Their old record label lands a bombshell by asking them to reunite for a series of huge concerts. These would be the gigs of a lifetime with a pay check to match – some need it more than others – and old wounds leave deep scars. A lot has happened since The Thunder Girls were ruling the charts. Addiction, breakdowns, bankruptcy and divorce have led them far from the lives they once lived.

If they are to move forward, the past needs to be laid to rest – but there is more to this reunion than meets the eye.

1989! Pop songs fluffy and nice. However there were some political songs. The Berlin Wall was still up and apartheid was in place in South Africa. We had sounds like Sowing the Seeds of Love by Tears for Fears and Another Day in Paradise by Phill Collins, up against Kylie Minogue’s Hand on Your Heart and Jason Donovan’s Too Many Hearts Broken. This is the world the era in which Melanie Blake begins the story of The Thunder Girls, the four girl  pop band sensation. The band lends it’s name to this book engaging book. The Thunder Girls is spicy and it reveals the misogynistic underbelly of the pop world.

We are presented with the four adorable young women, Chrissie, Roxanne, Carly and Anita, who make up the girl band, The Thunder Girls. Then, the cracks began to show. Three of them are shafted by their ambitious band mate, Chrissie, for a solo career. Thirty years later, we are shown how their lives have evolved. It’s all glitter and sparkle. The kittens have grown claws and they use them… literally. You can see Melanie Blake’s insider knowledge of the industry. The characters are fully fleshed out. I had to remind myself they don’t exist in the real world… but, it beg the question, who were these women based on? The book had a good number of characters to create their world.  They’re all flawed but have redeemable qualities. I grew to love them.

The book is fast paced and relevant.  Melanie touched on things that made me wonder “how did she know?!” and “did she have to rewrite this chapter?” The Thunder Girls is the book we have been waiting for but didn’t know it. It offers a hint of nostalgia with a double helping of reality. We go on a journey with The Thunder Girls there’s friendship, betrayal, revenge and murder. All the ingredients for a page-turner and a good read.

Congratulations to Melanie Blake for penning such an entertaining debut novel.

Thanks to Ed PR and Pan Macmillan for sending me an advanced copy to read; for the purpose of this review. 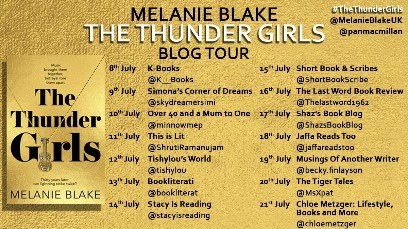 This review is part The Thunder Girls blog tour. See the graphic, on the left, for other reviews as well as interviews with Melanie Blake.

The Thunder Girls by Melanie Blake is out now, published by Pan Macmillan, priced £7.99 in paperback original.

Melanie Blake is an author, playwright, TV critic and a former music manager. She is 40 years old and head agent at Urban Associates.

Her career in the music industry began in 1998 as a camera assistant for BCC TV, at the Elstree Studios in Hertfordshire, for Top of the Pops. 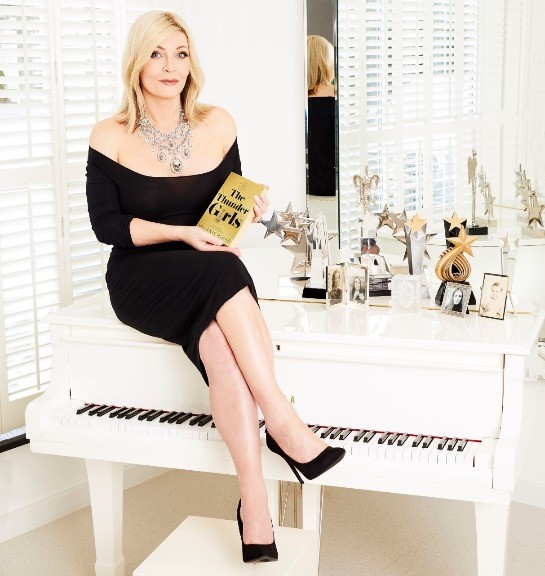