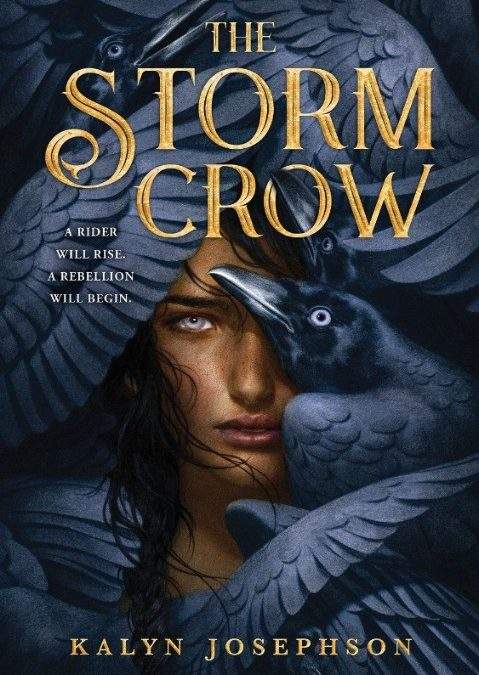 Ok, full disclosure I don’t normally read fantasy novels. I’m paranoid that my imagination would let me down. Yet, when I read the plot for The Storm Crow, I knew I had to read it, so I accepted a reviewer’s copy.  It ticked my boxes: strong female lead, sword fighting, diverse characters. Additionally, I was curious how the author, Kalyn Josephson, would handle the topic of depression. The Storm Crow is a credit to Kalyn. She wrote a novel even a newbie fantasy reader would fall in love with. The ‘goodies’ and the ‘badies’ are fully developed. I believed their humanity, or lack thereof. Sometimes, railed at them. There’s drama, intrigue, adventure AND the small quiet moments. The Storm Crow is an action packed coming of age novel not to be missed.

The Storm Crow follows the life of Princess Anthia, who has fallen into a deep depression after a terrible night in her home: the tropical kingdom of Rhodaire. The Illucian Empire came and destroyed everything good, including their elemental crows, the magical creatures in the Kingdom. But when her sister Caliza is forced to have her marry the vicious Illucian warrior Prince Ericen, Thia is spurred into action. And after stumbling upon a hidden crow egg in the rubble of the ruin, the sisters hatch a dangerous plan to win back what was taken from them.

I admired Princess Anthia. She’s mid-flight on her storm crow, when we meet her.  She is strong, brave and free. Then her, world changes in one night:  the Illucian Empire came and destroyed everything good.  Six months later, she’s reeling from the trauma of that night. She says ‘… it had been nearly six months. While I hid, the world went on without me’.  When she learns of her forced engagement to the Illucian warrior Prince Ericen, ‘The familiar weight slithered up my shoulders. I didn’t even try to make it leave. I was floating in limbo.’

Through Princess Anthia, Kalyn shows the struggle of depression. The princess’s words resonated with me. I knew them to be true to my own battle.  Kalyn dealt with the topic with sensitivity and demonstrated how heroic surviving the illness is. A real-world issue dealt with truthfully. Honesty is important to Kalyn’s target audience who may be experiencing the unnameable weighty feeling, just like Princess Anthia.

Princess Anthia’s bestie is Kiva. They have an unbreakable bond that’s beyond friendship; it’s a kin to family. Kiva’s level-headed controlled (most of the times) demeanour balance the princess’s hot-hotheadedness. Kiva and other characters bring a refreshing diversity that main stream publications often lack. Kiva is the sword-wielding lesbian. The world is inhabited by people of different races and colour; some with skin the colour of wet sand.

The landscape is vital to the story. Through the social, political and climate landscape the peoples are understood.The impending battle between tropical, temperate and icy worlds felt epic.

Congratulations to Kalyn Josephson on penning such an action pact enthralling debut novel. Kalyn’s word made my imagination sore. I can hardly wait for part two!

Thanks to Midas Pr and Sourebooks for sending me an advanced copy to read; for the purpose of this review.

The Storm Crow by Kalyn Josephson is out now published by Sourcebooks RRP £13.99

Kalyn Josephson is a debut author living in the California Bay Area. She loves books, cats, books with cats, and making up other worlds to live in for a while. Visit her at kalynjosephson.com