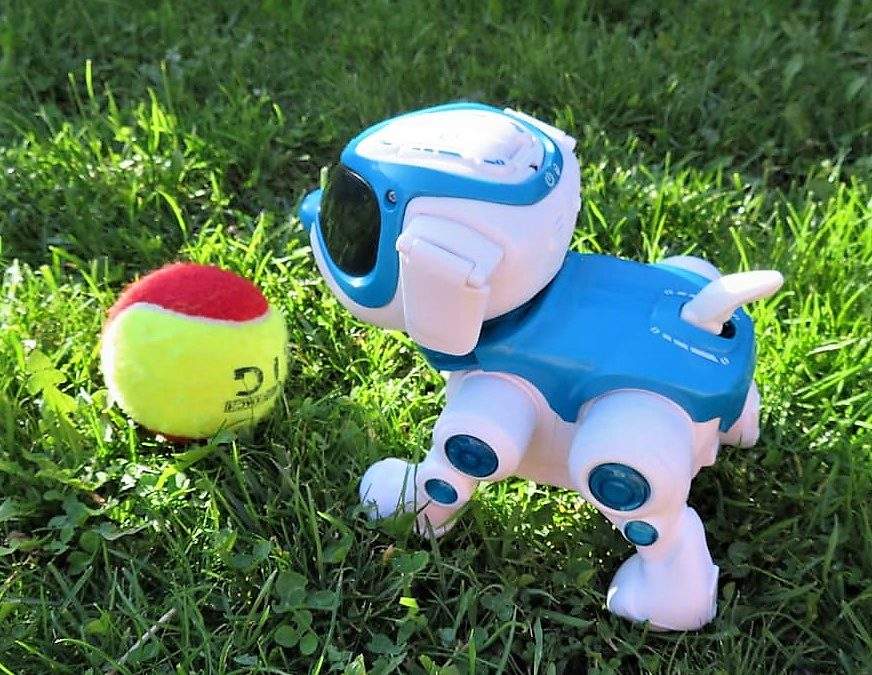 The kids have been bugging hubby and me for a pet. They are partial to a puppy, but guess who would be taking puppy for a walk while they are at school? Me of course, so, I’m pleased that the toy market is offering robotic pets. They are lovable without the mess or stress.  I was happy to review the new Teksta 360 robotic pup  with them.

Teksta comes from the Character toy brand. It’s aimed at 5 + years. He’s portable and would fit easily into a child’s rucksack (dimensions 19 x 15 x 17 cm). 4 x AAA batteries are required; they don’t come in the package.

He has the capability to walk, sit, beg, flip and interact. His eyes light up and his collar does too. Teksta certainly has won us over.

Firstly, this lovable robotic pup has a number of fun and cheeky sounds that will keep little ones entertained for days on end.  When Teksta was set to conversation mode he didn’t walk which is great because it meant he can be played with in smaller spaces and higher surfaces. You’ll know the mode has been set when you hear a ding. He would bark in this mode.

On funny noise mode Teksta gets cheeky. He snored, passed gas and there was one sound I could quite put my hands; I’ll call it a kiss. He didn’t walk in that mode either.

The 360 flip was activated when both the conversation and funny nose mode buttons were pressed simultaneously. Then, three dings rang. Once it was set a clap or a noise would cause Teksta will sit, beg and finally flip. The fun doesn’t stop there…

… finally, there’s the Augmented Reality mode which is activated with the Teksta 360 App. The app is free on App Store and Google Store. Using the app, Teksta can be bathed, clothed, fed and cured of a virus. First you scan him from head to foot then a blue ring appears and that allows you to care for Teksta.

On occasion there was a quite a delay before the blue ring appeared but once it did, the fun was on. 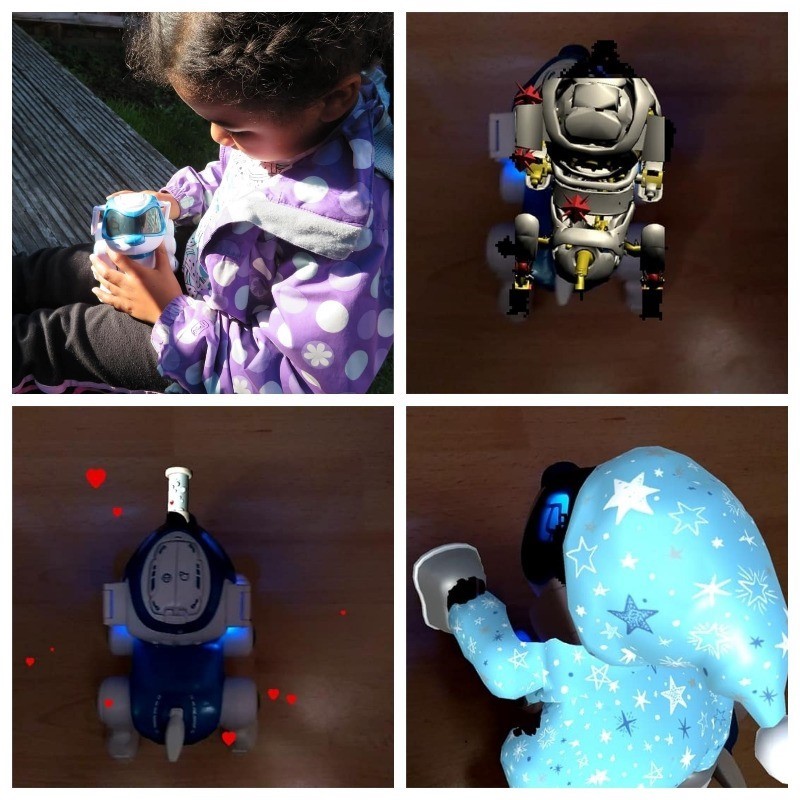 Best of all, Teksta registers when he’s been feed and cared for.  When we let a few days lapse, we could see that food charge was low in the grid at the bottom of the screen. I think for mini pet lovers, this is safe and fun way to test if their are ready for real pet.

We all gave Teksta two thumbs up.

Valentina renamed him Scruffles. She thought he was cute and enjoyed his funny noises best.

As for myself, I really liked the augmented reality which allowed us to dress him up in adorable outfits. Best of all, Teksta can walk an a variety of surfaces. Under each paw is a small wheel which allow him to go over carpet, laminate flooring and decking boards.

Teksta 360 is available at Character, Argo, Smyths Toys, and Amazon and RRP £29.99. Based on all he can do and the price point, I think Teksta (Scruffles) is a brilliant gift.

For more information on the Teksta 360 visit the Character website.