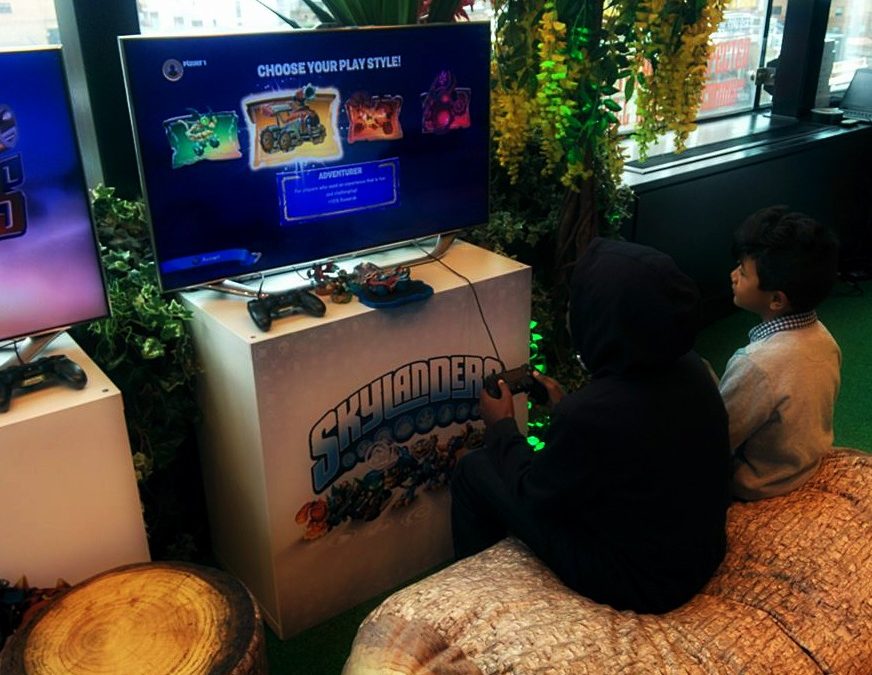 I first became aware of Skylanders Summer 2012 at the Lollibop Festival. Angelo was a toddler, so I didn’t visit the display booth. Over the years I saw the adverts but we never bought it because we thought it would be too scary for Angelo. He’s prefers less violent pastimes, with social interaction. Then, this spring we were invited to the launch of Skylanders Imaginators. At that point stage his only reference of gaming was Nintendo Wii’s boxing, tennis and Mario Kart from time to time. We went along and our family friend Master B. joined us. I was curious to learn more about Skylanders first hand, now that Angelo older. The launch was held at the trendy Ace Hotel, in Shoreditch, we had a splendid time. Read on to find out all trying features Skylanders Imaginators has in store.

Arriving At The Skylanders Event

We arrived early at the snazzy location, in Shoreditch, for Skylanders Imaginators. The boys and I made use of the time snapping balcony selfies. Once we entered the event room it was a panorama of kiddie delights. Lick Me I’m Delicious Ice Cream Cart gave us attendees the chance to guess the mystery ingredients in the ice cream made with liquid nitrogen.  There was a sweets cart packed with all sorts of colourful, sweet, fizzy, popping confectionery. 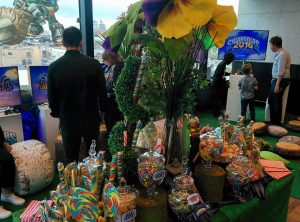 The fun factor was not forgotten. A cartoonist drew carton portraits of and superimposed it onto a Skylanders Character of their choice. Angelo chose Kaos. Then he and I dressed up and had or photos taken in the photo booth. While at the event I had the pleasure of meeting Charlotte of Brice Baby blog. Eileen of ET Speaks From Home has been a cyber pal for a few years. It’s always a pleasure to run into her at an event. After mingling we sat for a short presentation on Skylanders Imaginators,  due out in October 2016.

I was thrilled by what I heard at the Skylanders Imaginators presentation.  Angelo is creatively inclined. I believe that he and other children with big imaginations will find the numerous customization options the game offers quite appealing. In fact on the day the kids had a chance to contribute to creating a character during the presentation. Here’s how it will work:

…gives players immense possibilities — including appearance, powers, abilities, name, catchphrase, musical theme and much more — to make the wildest Skylanders imaginable. The amazing depth of the creation system could allow for more than a google distinctive characters. 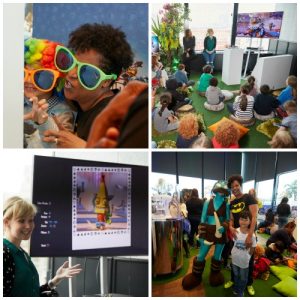 With the evil Kaos on a new quest to take over Skylands, it’s up to Portal Masters everywhere to create their own Skylanders – known as Imaginators – using the new elementally-aligned toy type call the Creation Crystal.  Creation Crystals also allow players to transport their Imaginators to consoles at anytime, anywhere!

Skylanders Imaginators introduces Skylanders Senseis, all-new heroes who represent 10 powerful Battle Classes such as Knight, Sorcerer, Bowslinger, Brawler, and more.  Skylanders Senseis help train created Imaginators by offering a range of benefits including unlocking super-cool Imaginator weapons, providing access to special areas in the game, as well as bestowing Secret Techniques across the Battle Classes. Senseis also have their own unique benefits including the extraordinary ability to unleash Sky-Chi – the ultimate Battle Class super move.  There are a total of 31 Senseis, which include some fan-favourite villains who have been reformed and now fight for good!

By the time we left the event, Angelo was sold hook line and sinker. He wore his Skylanders t-shirt for two days, slept in it too. I had to ferret it away on the sly to wash it.  Sometime after the event, we received a thought full package containing the Skylanders Super Chargers and game figures. Angelo and Valentina unboxed them. 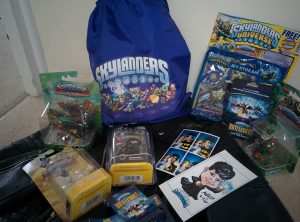 I don’t worry about too much screen time or gaming addiction with my kids. They are and will always be outdoor lovers. However, on a rainy day in doors a sibling gaming challenge can’t be wrong.