Riley Can Be Anything: book review 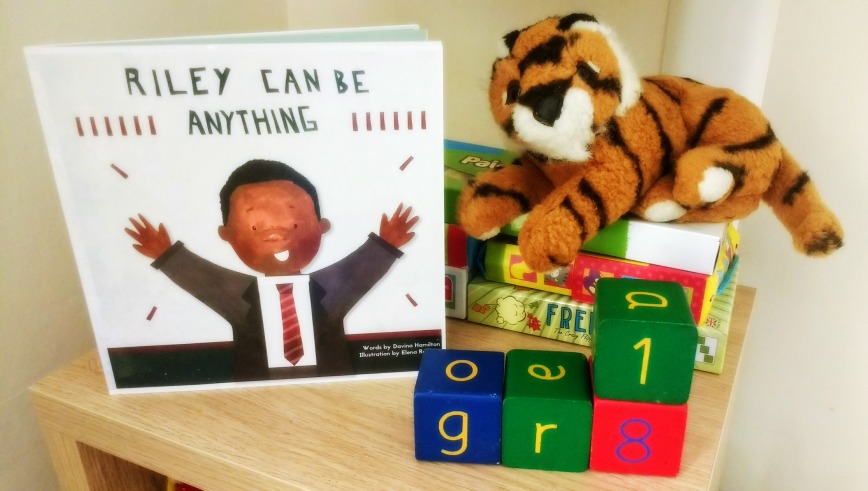 Riley Can Be Anything is a first book by Davina Hamilton, Former Entertainment Editor at The Voice newspaper (and illustrated by Elena Reionoso). It’s an inspiring rhyming story. Davina wrote to address ‘ongoing reports about the underachievement of black boys in schools, coupled with her personal desire for her children to see book characters that reflect their image.’ I look books that always parents to engage in conversations with their children, in a fun way. As a child I hated being asked ‘so, what do you want to be when you grow up?’ Here I am at 40 plus still don’t have a clue. However a book like Riley allows the child to ponder that question in their own time. It allows them to envision a world without limits on them. I reviewed Riley Can Be Anything with my kids, our opinions varied.

The Power Of Rhyming

Riley Can Be Anything is an empowering book. As a grown up I get that on every page.  It strives to entwine Afro-culture, mores and social contributions into it a tale of aspiration. I like the look and feel and the fact that it’s portable. It would fit into most kid-sized knapsack or handbag. However, that’s me thinking as a grown-up. What makes the book good an empowering through the eyes of an adult, Angelo and Valentina felt it was to ‘same same’. They asked ‘why does it say the same thing over and over’. While this is not their first time hearing a story with rhyme or repeated refrain, in fact that is the style of many popular picture books.

On one occasion, I even tried playing Jazz softly in the background for ‘ambience’. It didn’t work. Angelo said he liked the story because the kids were using their imagination to think about what they would be when they grow but it was too long. I was pleased to see that Riley’s class mates were of different ethnicity. It also presented girls who wanted professions, not to be princesses. I only wish Lucy and Jane something other than the typical Teacher/Writer. Why not a scientist or an explorer? 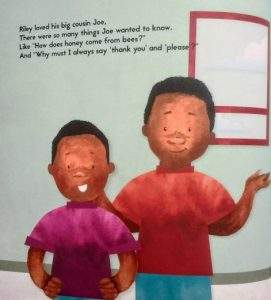 Riley Can Be Anything is aimed at pre-schoolers. However, I think it’s better for Key Stage 1 (5-7 years).  At this stage little ones are beginning to understand the world around them more. They have some ‘life experience’ from the playground. They are learning to read and write and to articulate their thoughts. I think Angelo may be on to something.  It’s a book that both girls and boys can enjoy. Nonetheless, because boys can be restless, it could have had less text and more imagery.  I would still recommend it though.

I want my kids to think beyond pre-set borders of society. They are still in a bubble, in a small school, in a small neighbourhood and exposed to a wide variety of experiences. All it could takes is one prejudicial statement at vulnerable time, make child doubt themselves and their worth. It happens to us as adults. Also, like adults perhaps kids need to be a a particular time and place to be drawn to a certain book.

I would books like Riley, should be a part of their personal library to be read, when they need it. I would give  Riley Can Be Anything thumbs up.