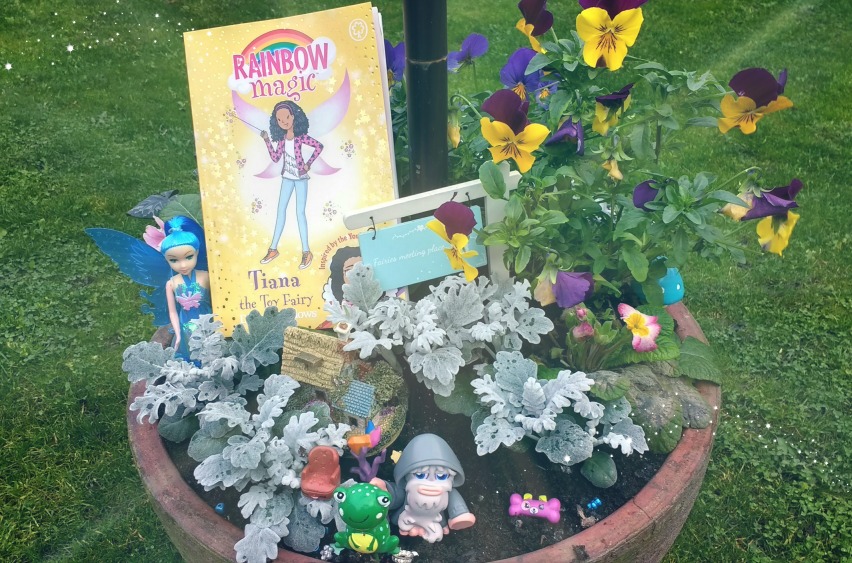 Angelo and Valentina enjoy viewing toy reviews as much as their peers. Untill recently they have viewed American toy vloggers exclusively. Then I heard about Tiana from Toys AndMe.  Now, we look at her reviews from time. She’s such a sweet girl with infectious enthusiasm. I was delighted to read on Twitter that Tiana had inspired the latest book from Rainbow Magic series, entitled Tiana the Toy Fairy. It was written by Daisy Meadows (who’s a pseudonym of the authors who ghost write for the series: Narinder Dhami, Sue Bentley, Linda Chapman, and Sue Mongredien). The series follows the lives of Kirsty Tate and Rachel Walker. I was fortunate to be sent a blogger copy to review Tiana the Toy Fairy my readers. When her magic marble is stolen together with Kirsty and Rachel, Tiana set off to find it.

Tiana the Toy Fairy is Toys AndMe Special Edition in the Rainbow Magic Series. There are currently twenty three in the series. Each series comprises of a group of fairies. There is a fairy with a specific gift in each book who comes to the aid of Rachel and Kirsty when they have a challenge to overcome. Series 1 featured Rainbow Fairies, Series 11 Magical Animals Fairies while Series 23 presented Fairytale Fairies. Tiana is in perfect company in this realm of magical beings. She bears characteristics of the Tiana the YouTuber we adore. She has ‘cheerful brown eyes’ that look full of fun’ with big curly hair that bounces on her shoulders.

Tiana uses her magic marble to look after toys and good times, as well as ensuring that kids are kind to each other while they play. When Tiana appears to Rachel and Kirsty, the girls where in their car en route to Toy Town for the Fun Fair. Tiana introduces herself and tells them her plight of the stolen magic marble. On arriving at the Fun Fair it doesn’t take long for the trio to see what chaos is amiss. Tiana uses her magic to take the girls with her to Fairyland in search the culprit naughty Jack Frost. They must retrieve magic marble  save her world and theirs from Jack Frost’s mission to ruin fun, fair play and the toys.

Tiana the Toy Fairy is charming story about the power of friendship and laughter. If you know a child who loves rainbows and magic as much as we do at The Tiger Tales HQ this is a good read. The book is suitable for independent readers. Its a junior fiction book. While it’s not a picture book there are a few black and white illustrations. Younger children still can enjoy it was a miniseries so to speak. I read to Angelo and Valentina over a few nights chapter by chapter. My two are all about good times, so liked the Fun Fair and Fairyland setting. Valentina especially liked hearing about the girls off on adventure. The book would make an awesome stocking filler for Tiana Toys AndMe fans or lovers of all things fairy world.

Tiana the Toy Fairy can be bought online from Hachette Children’s Group or in store from major book shops. Additionally, you can search hashtag #rainbowmagic to join the conversation.

Please note the books were supplied by the publisher for the purpose of this review. They have no influence over this review or the content of the blog