After a quiet but lovely day together for Chinese New Year… my week went down hill. It’s has been MENTAL! To say the least, but here’s hoping that things are on the up for the week to come: 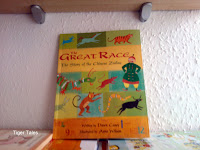