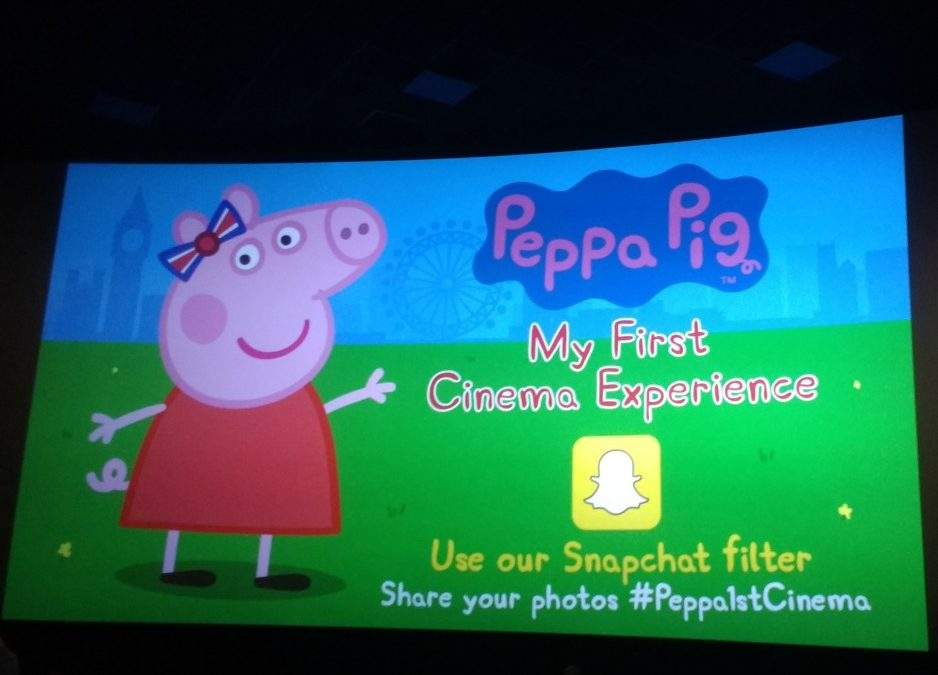 Before I became a parent, I’d often over hear parents talking about a children’s programme called Peppa Pig.  ‘Oh that Peppa Pig…’ they’d say. I wondered why parents seemed to think that an animated character could have so much influence over their children. Then I had my Angelo and Valentina. They would respond with certain phrases and I’d think how does he/she know that, or where did he/she hear that?! Sure enough I would eventually tune in to an episode of Peppa Pig…. OH!  Actually, I don’t mind my kids asking questions about things they don’t understand or doesn’t seem fair… well most of the times. So, yes, I adore Peppa Pig and so do my kids. Peppa Pig now has nine new episodes and interactive sing-a-long content, in a cinema release entitled Peppa Pig My First Cinema Experience. The Tiger Tales had the opportunity to attend the screening of Peppa Pig My First Cinema Experience, loved it!

Peppa Pig My First Cinema Experience is for cinema’s only, Peppa doesn’t’ actually go to the cinema. The kids and I were pleasantly surprised by the interactive entertainment in between each episode. I could hear other little viewers joining in with Peppa, George and their friend Daisy. They sang songs, made animal noises and the sounds of musical instruments.  The popular preschool songs The Wheels on the Bus and Row Row were a hit. Angelo and Valentina’s first cinema experience was a couple years ago. They both enjoyed the film but Valentina who was two and half got restless near the end. Peppa Pig My First Cinema Experience is timed to entertain little ones. It runs for 60 mins and is Certificate U (TBC). I think there could have been longer interactive breaks with Daisy but less of them. Angelo and Valentina loved her they said ‘she’s funny’ and ‘Peppa and George are cute’.

Peppa Pig My First Cinema Experience is out on general release 7th April just in time for Easter holidays and May half term. It can easily coincide with a trip to the park, zoo or seaside. Within the nine episodes there is much to raise children’s interest in the world around them. For example: episode one ‘Peppa Visits London’, Peppa and her friends are taken on a tour of London by non-other than The Queen! The Queen takes them on an unforgettable tour of iconic London landmarks including Big Ben, Tower Bridge and Trafalgar Square. It was Angelo’s favourite, because of the minor incident on Tower Bridge. He thought it was funny. In ‘The Police’, Policeman Panda (voiced by David Mitchell) talks to Peppa and friends about bike safety. In ‘The Zoo’ viewers meet another new character, Mrs Crocodile (voiced Jo Brand). They learn about what some animals eat. I value the way Peppa Pig My First Cinema Experience teaches without being ‘teachy’. In ‘Move to the Music’ the characters all play with instruments from different cultures. Although it’s not mentioned, adult viewers. There are many excellent talking that parents and carers can use tart discussion and create learning experience for little ones. Another personal favourite was the four-part story in which Peppa goes on an Australian holiday to visit her old friend, Kylie Kangaroo. Peppa and her family were taken to work with Mrs Kangaroo who’s ‘office’ is the ocean (which happens to be The Great Barrier Reef). We don’t’ know for certain what she does but I like to think of her as an Oceanographer. It’s awesome for children to see a female that role especially now, when there is a drive to get more girls into STEM (science, technology, engineering and mathematics) education. Valentina’s favourite was ‘The Outback’.

Check out the trailer below:

You can find out more about Peppa on the website  or in stay the loop via Twitter search #Peppa1stCinema to join the conversation.