Our family staycation in Wiltshire 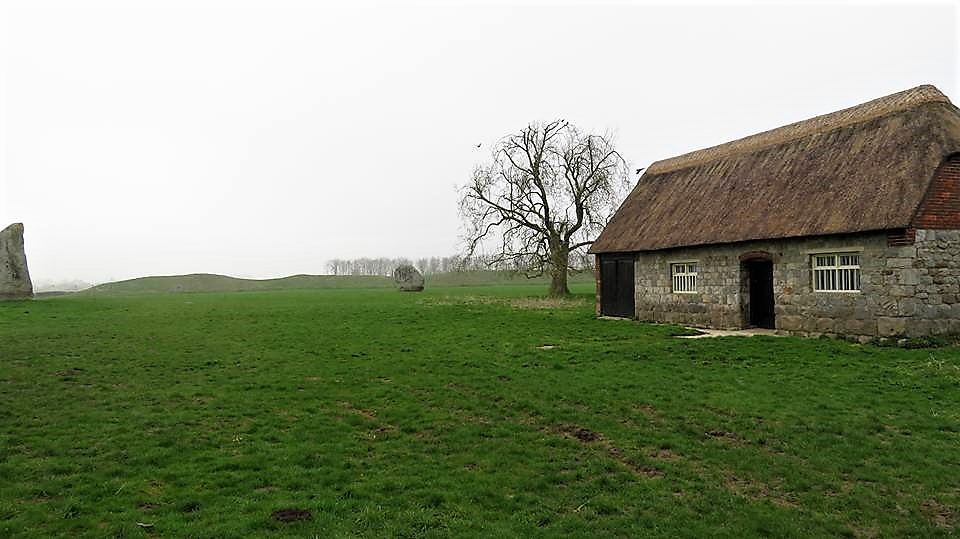 I love it when the kids are on school break, just for the lay in but so we can go off on adventures together. Over the Easter break my family and I had a staycation in Wiltshire. Hubby booked a stable flat in Warminster, Wiltshire via Sykes Cottages and off we went.  The downside to British staycations can be the weather; it’s hit-and-miss. On this occasion, it rained every day of our holiday. Nonetheless, we made the best of things by visiting nearby towns and cities. I always plan trips with rainy day options which was handy on this occasion. Our family staycation in Wiltshire was an enjoyable bonding experience. 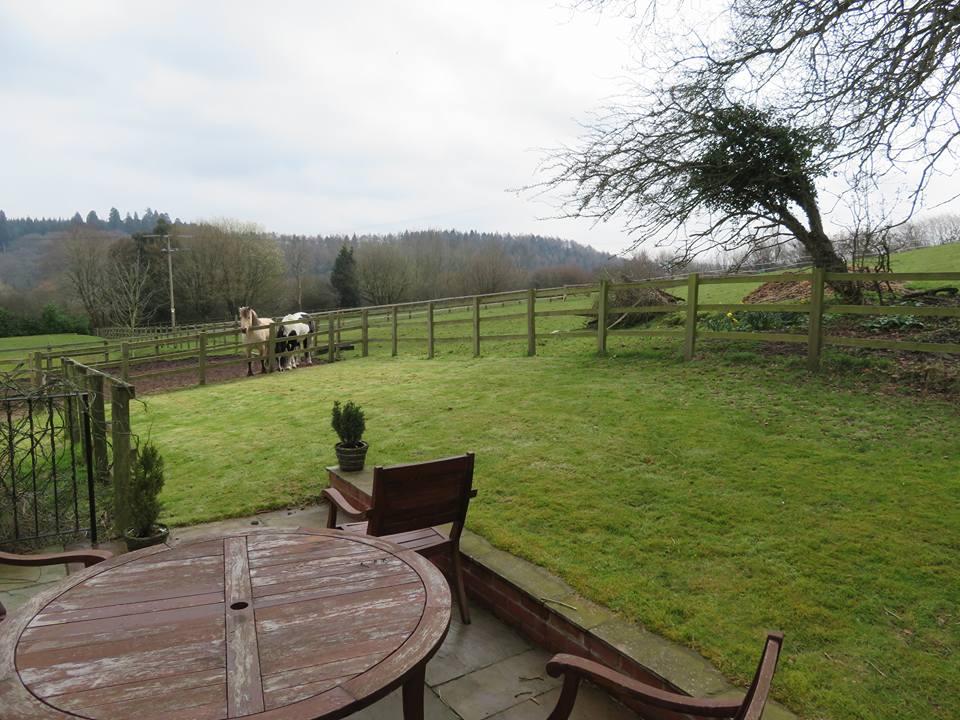 Where We Stayed During Our Staycation In Wiltshire

For our staycation in Wiltshire, we booked a stable flat, via Sykes Cottages,  in Warminster. It was small and charming. It was a treat to wake with nothing but green views for miles.  There was one bedroom but the kids had a double pull-out bed in the living room. No washing machine or dishwasher as provided but other usual amenities were catered for including broad games. Monopoly was our game of choice. By the end of the week Angelo as quite adapt.  He beat his dad and me twice! He’s wit and patience through the game was impressive. He made me learn to love the game again.

We all chipped in to do the chores. I did the cleaning, hubby prepared packed lunches and the kids tidied the toys. We ate out a few times as a treat but when we didn’t we ate together at flat which was in itself a treat. The kids thrilled that there were horses on site, so they visited them daily.

During out staycation in Wiltshire, we drove around a lot. Some attractions we only spotted from the car, like Stonehenge, Avebury stone circle and the Westbury White Horse.

One rain day we went into Warminster town centre.  The town ‘derived its name from the Minster Church of St Denys which was built in Saxon times within a loop of the River Were’. We trawled the charity shops for bargains, visited the local Flying Saucers Painting Pottery Café. In total studio time, two ceramic pieces and postage totalled about £30. The studio polished and fired the ceramics before posting them which was handy. (Ours arrived the day after we returned home) We ended our day at J.D. Wetherspoons for a family pub dinner.

Somerset  was only 40 minutes away so we visited twice. Actually, we drove to the Park n Ride and caught a bus from there into the city centre. We bought the family museum saver ticket online which allowed us to visit the Roman Baths, the Victoria Art Gallery and Fashion Museum.  Totally savings according the website was £7. Valentina really got into the interactive tour at the bath house, as well as the period dress-up at the fashion museum. Because children in Somerset returned to school one week before Surrey, there were no museum lead activities at the art gallery for children. However the kids we allowed to colour in pictures based on original pieces at the gallery.

Valentina did ‘Adoration of the Magi’ while Angelo did ‘Moonlight Scene’ by Sebastian Pether. There was the option of treasure hunt of sorts to find objects hidden within paintings be we didn’t do it. I didn’t visit Bath Therme Spa. It’s tricky to have spa time on a family break. 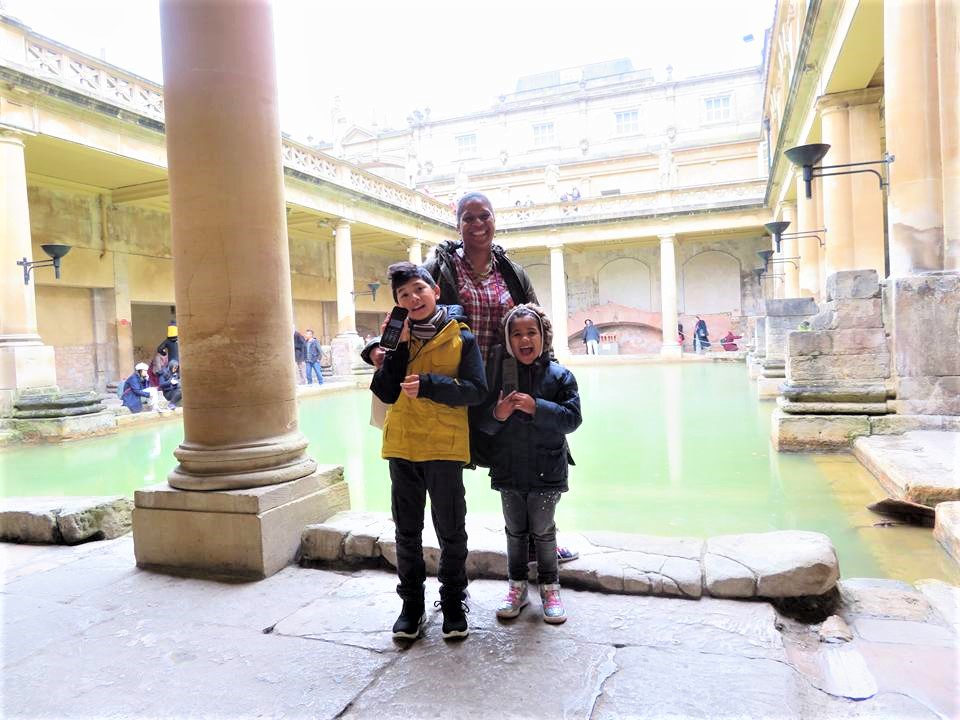 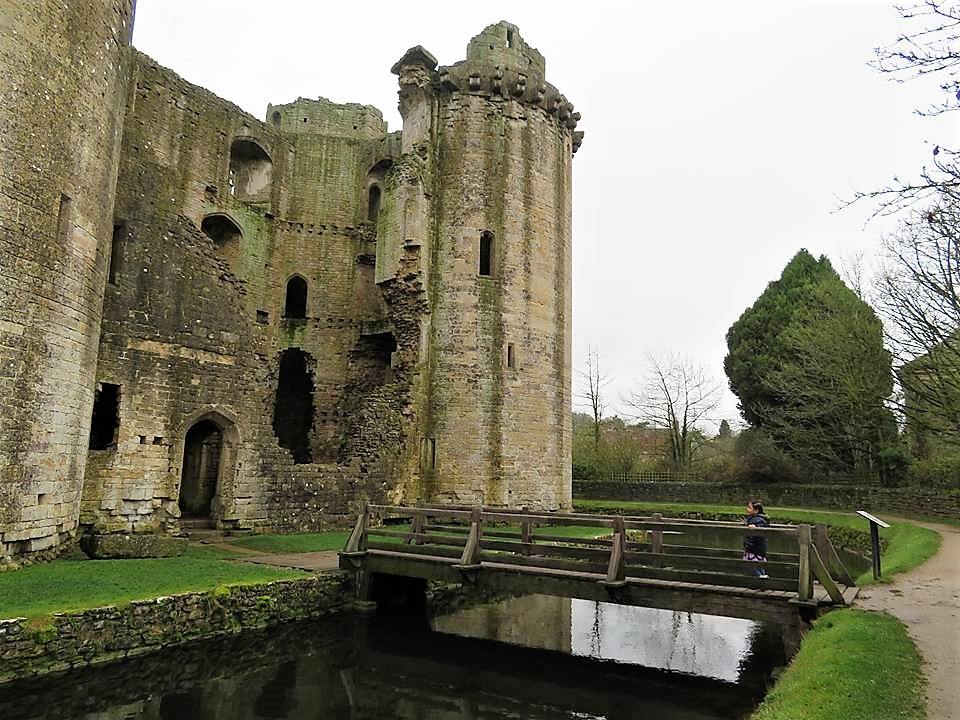 The town of Frome, Somerset was about 30 minutes from our staycation home but unfortunately we didn’t visit. Instead, we stopped by Nunney Castle, near there. The ruin is the ideal place for little adventures with big imaginations. Entrance is free. After crossing the moat bridge and we had a look around. The moat  has fishes, although recently several have died. The matter is currently under investigation.

Nunney Castle dates back to medieval times. It was built Sir John Deere la Mare in the 1370’s. Sir John was a local knight. His castle was besieged and damaged by Parliamentarians in 1645, during the English Civil War. Plaques on site provide a brief history and illustration of what it used to look like back in the day. 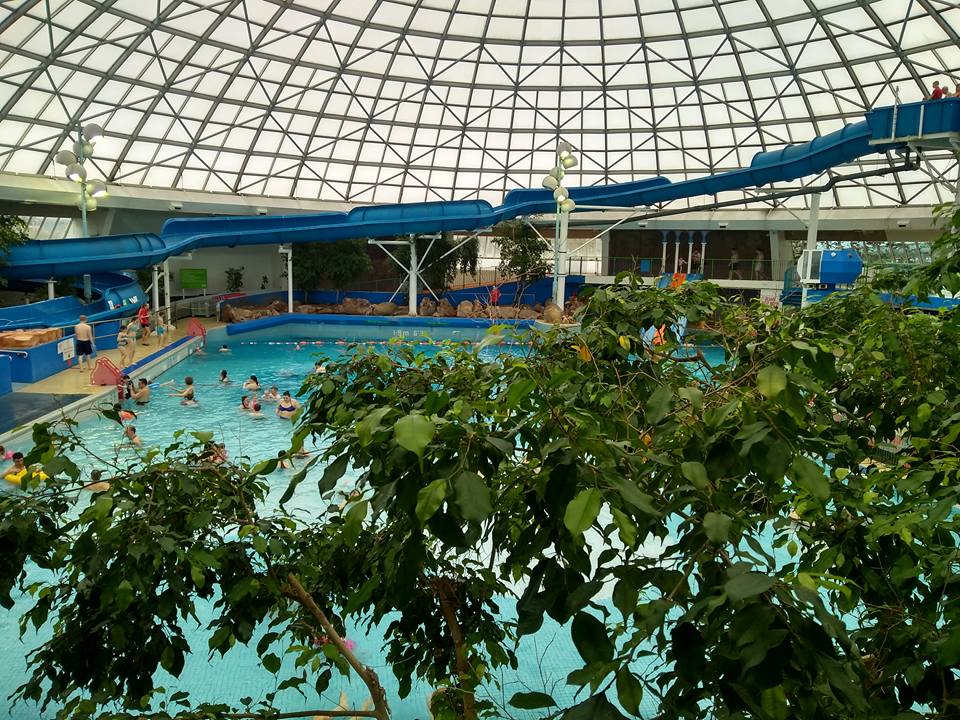 One of the things we also enjoy doing as a family is swimming. The nearest pool was in Westbury, Wiltshire; the Westbury Swimming Pool  (FYI Later this month they will mark their 130th Anniversary!) We swam there once.

Driving to Swindon From Warminster

We also drove further afield to Swindon, which was 1 hour and 20 minutes away. The attraction to Swindon was McArthurGlen Designer Outlets which happens to be 10 minutes from the Oasis Leisure Swimming Pool.  En route we drove through Westbury which is how we came to see the White Horse. We also drove through Avebury which has special significance to hubby and me ( on the way back we stopped briefly to see the Stone Circle and the cottage we had a romantic break in many moons ago.)The Outlets is housed in the restored Grade II listed buildings of the Great Western railway works and it’s fully covered which was perfect for the rainy day. I found a few bargains while the kids played in the play area. They also adored the little train shuttle that took them and their dad around the outlet.

From the retail park we went to the Oasis Leisure Centre Swimming Pool. The pool area had an enchanting tropical paradise aesthetic. It has a wave machine and water cannon, 3 giant water slides, the Great White, Sidewinder and Storm, and a hydro-slide, as well as a Pirate ship water play area for toddlers. I’m not an adrenaline junkie, so I spent most of my time in the Lagoon area and attempted the Sidewinder once and so did the kids. We only spent about 1 ½ hours because band systems was in effect.

Final Thoughts On Our Staycation In Wiltshire

Our mini staycation in  Wiltshire was a success. Prior to this we stayed in Lydney, Gloucestershire last Christmas.

Next stop is Pembrokeshire, Wales in the summer!! I’m super excited. We’ll be staying near Barafundle Bay which is apparently so gorgeous it rivals the Caribbean. We lasted visited Pembrokeshire about three years ago and stayed in the holiday park Bluestone.

Disclosure: This post contains one sponsored link about attractions you may also find interesting.