On Penmanship and Cursive Writing 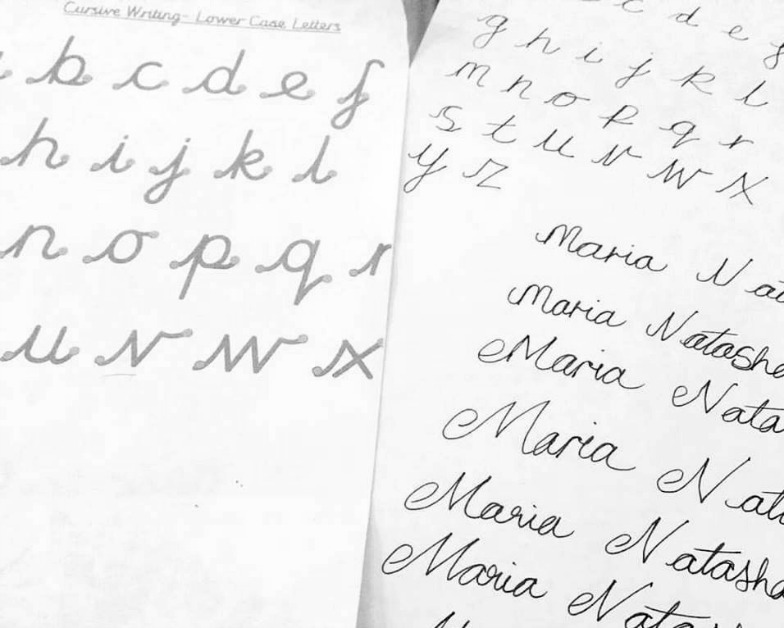 Last month I discovered a writing challenge on Instagram #rockyourhandwriting. The timing could not have been better. My handwriting has always been poor.  Now that Angelo is in Reception, he has begun to learn the basics of cursive writing. Sitting with him to practice his writing, he immediately spotted the flaws in my own. Whenever I wrote a letter or a word to for him to copy or practice phonics, he’d ask ‘mummy where is your lead and lead out’. I’d reply ‘you write it your way, I’m just showing you the letter you need’ or something to that effect. Since practising my letter and number formations via the prompts on the #rockyourhandwriting challenge my script has improved.

It’s funny the things you remember about your school days. The moment I began the #rockyourhandwriting challenge I was transported back into Standard 1 (I think its year 1 in the UK). At age 7 I sat in class and wrote rows and rows of the letter ‘p’. I don’t know why but despite all the practice I never had a pretty cursive script which disappointed me, In fact, I was a bit ashamed. They say your handwriting tells a lot about your personality. SO what did mine say? I remember having it analysed by Ruth Meyer, Forensic Handwriting Analyst, at Britmums conference in 2012. I’ve forgotten her feedback but at least she didn’t say I had disturbed mind or something distressful. I practised calligraphy for a short while in my twenties, when I used to make handmade cards but my skill was average. Eventually the more I worked on the computer the worse my handwriting became.  Until quite recently it was a strange mix of lower case block writing to be legible and random cursive connection when I hand felt like it.

I when I came to England,  I loved writing letters to my family and friend. I would write pages and pages over a period of days. I felt by spreading out the writing I was less rushed and I could make a fair attempt completing a letter that was legible and entertaining. By the time I was married I’d long since lost the time and the feelings to write in that way. I’d even given up journal writing. Now I thoroughly enjoy writing again since taking the #rockyourhandwriting challenge. I’ve even resumed making the odd card and I’m wondering, ‘who can I write to?’ and ‘who can I make a card for?’ From time to time I search the hashtag to see what other writers are doing. The skill of their cursive writing, and the creativity and flair of the illustrations that accompany it is mind-blowing.

If you like writing or are like me and need to improve your script check out #rockyourhandwriting challenge. It’s hosted on Instagram by @decadethirty; @prettyprintsandpaper; @tinyrayofsunshine and @boho.berry … I warn you though, you just may want rush out the shops for all sorts of cut stationery… and that’s a whole other addiction right there! Drop me a line below tell me you’re writing bugbear or share any techniques you have to improve handwriting.