My son: The Motivator

I’ve often spoken about Angelo’s growing vocabulary and speech improvement. Nothing new or miraculous to veteran parents but for a first time mum, when he was younger longed for the day he could speak. He seemed to cry a lot of the time for reasons unknown to me. All his cries sounded the same.  We never did baby sign, or baby massage or anything that might have been of assistance when he was much younger. I was too afraid to venture out, much later on I was diagnosed with PND (postnatal depression). Naturally when his speech began I was over the moon BUT then came the times when he’d repeat things he should not. Other times he’d say things that were hilarious. We really got an insight into how his little mind was working and  a sense of his developing imagination. Today he became my motivator.

Set with the task of using Angelo’s toys creatively by his nursery, we be began our project. Angelo loves trains, farms and animals, so I thought it would be fun to combine these two elements in a scene he would enjoying playing with. I told him to build his tracks and I’d make the ‘farm’. 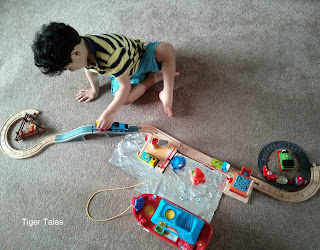 Using a mismatch of odds and sods of toys, we set up a train-line that ran past, a farm(come zoo), over a bridge, past a ‘harbour’ and into a dead-end with parked vehicles. It was while working with two fiddly bits of track that I lost my patience. I must have sucked my teeth. Angelo said ‘mummy try again!’. I had to chuckle. He was feeding me my own line!

The Power of setting an example

When he gets annoyed with his toys and starts chucking them about in frustration, I usually tell him to ‘calm down and try again’.  I did as I was told and we ended up with a scene that I’m happy to reveal, in its simplicity. 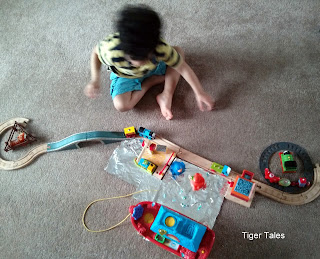 Today was one of the days Angelo repeated something that he should. I’m VERY proud of him; my little motivator.

Now all we need to do is to acquire some replacement tracks. Anyone got any ideas where we might look for wooden tracks?