My Girl: on embracing racial differences and sameness 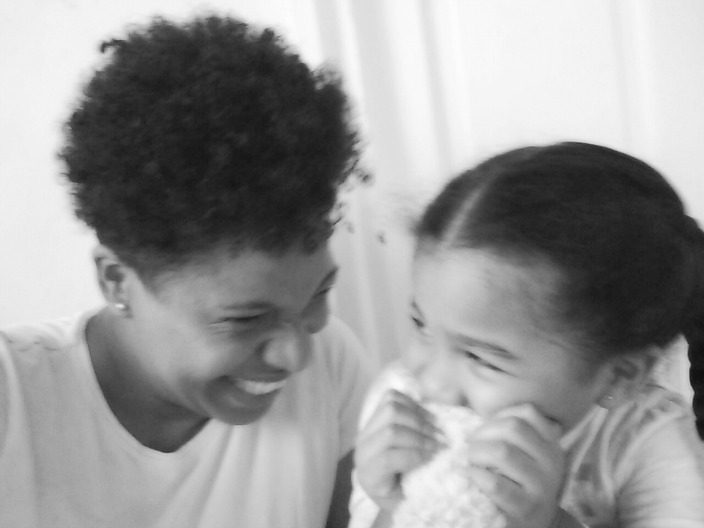 Happy New Year! Did you have a good Christmas? We had a restful indulgent Christmas. Even though I still had early mornings due to my darling children. You may know, Valentina turned four a few weeks before Christmas. She’s maturing and I can see a hint of the young lady she will become. She’s getting into girly makeup and style. I never thought I’d encourage such things but I can’t help but enjoy seeing her develop her style with in the age appropriate boundaries set. My darling girl is growing more into a ‘mini me’ but she can’t always see it.

Recently after a reading exercise with Angelo, I asked him to tell me what he noticed about the characters. At school both kids are encouraged to observe and talk about the difference between themselves and their class mates. We didn’t normally talk about race at home but I wanted to know what he noticed and how he would describe what he noticed. Valentina was with us. Straightway she noted one of the characters was black like me, as she put it. Then she went on to say that I don’t look like her mum. Up until that point I never knew she’d noticed and considered our differences so profoundly.

I encouraged her to continue, then she expressed her concern that I would not know her. We chatted about her feelings and her concerns. In her mind because we looked different, I couldn’t identify with her as my daughter. What she didn’t realise was we have more in common than she knew.

I located my childhood photos from the same age as Valentina, for her to look at. Hubby and I have always thought of her as our mini best of both. When we look at her we see my grandmother (mum’s mum), we see his mum, we see me and we see her him. She’s a spunky amalgamation of our two bloodlines. Angelo never shared Valentina’s concern even though he looks nothing like me. Perhaps, as a male he could never be me. The major difference allowed him to ‘accept’ my other ‘differences’.

Valentina on the other hand wants to be like me. She’s annoyed her hair isn’t like mine, while I wish I had her hair. She’s concerned that our faces are not alike she says ‘I want us all to be the same’. I get the sense she thinks I’m the odd one out. She has strong loyal loving feelings for her family. I suppose in her mind us all looking alike makes us closer. Then I showed her the special mark that she and I share. We have similar birthmarks in the same place. She looked at the photo of 4 years old me pouting the way she does now. Then, she felt better and made peace with our differences and similarities…for now anyway.

The importance of taking about race in the family

For years we’ve avoided talking about race. We wanted the kids to see people as people first and foremost. It never occurred to us that by avoiding the subject it would have caused anxiety. I read somewhere that by not talking about race, it makes ‘the other’ seem like something bad you don’t talk about. I guess they were right, so we are not doing that anymore.

Do you have mixed race children? Are you part of a mixed heritage family? How do you talk about race and if you don’t then why not? I would love to hear from you.