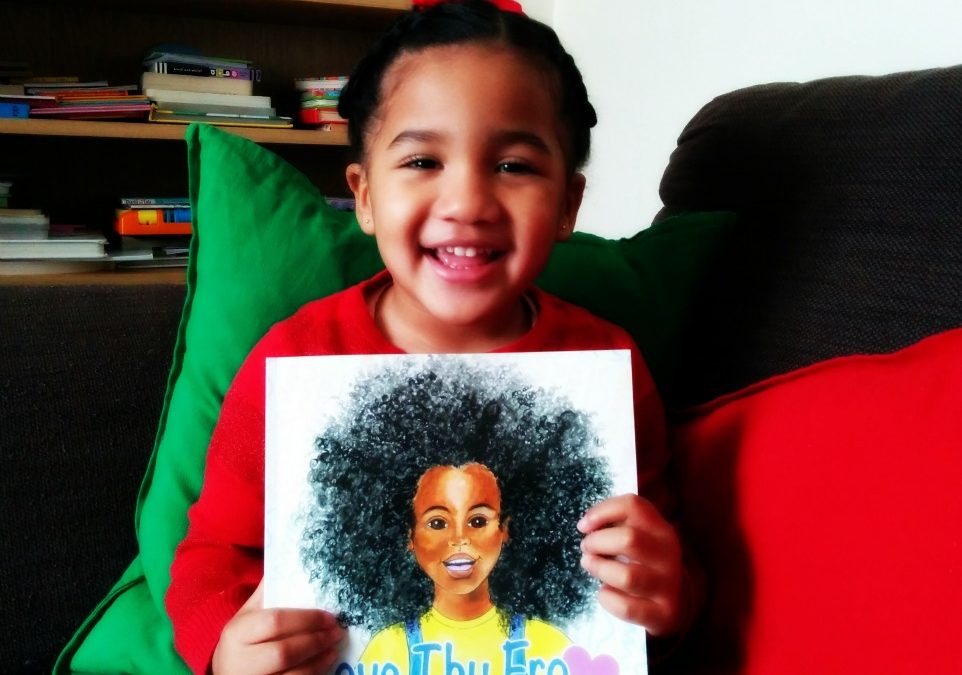 Casey Elisha launched her first book Love Thy Fro at Deptford Library, London, on 6th December. I was unable to attend but Casey graciously sent me a copy of her book for me to review with Valentina. I was very pleased to do so. While I don’t have actual figures and ratios, I do know there are not enough diverse books (especially picture books) for sale on the Great British High Street. Additionally, there are not enough diverse books in the libraries. I purchase books from America via Amazon. Kemi the protagonist of Love Thy Fro takes the reader on a journey.

Kemi shares her hair regime and demonstrates all the wonderful styles her hair can be transformed into. Her mother instils in her a message of self-worth and pride. Love Thy Fro had many points for discussion. I enjoyed reading it to my children, especially my 3 years old daughter Valentina.

Our Thoughts On Love Thy Fro

Valentina liked the hairstyles and was able to recount which ones she’s had before. She also liked it when Kemi’s mum told her she’s a star. Angelo shared that there is a child in his class with dreadlocks. Untill then, I don’t think he knew what the name of the style. It never came up in discussions. Love Thy Fro leaves readers with an empowering message for girls with afro, curly, kinky hair. I would say its suitable for 4-8 years old.

As a lover of books and an aspiring published children’s book writer myself, I was intrigued to know more about Casey’s motivation, the processes behind penning Love Thy Fro and bringing it to market. This is Casey’s interview.

TTT: What’s your professional background? Tell us a bit about yourself.

CE: I’m 24 years old from South London. I graduated from University in 2012 and got a degree in Mass Communications. I’m currently working full time in admin.

TTT: I understand Love Thy Fro is a message to your younger self and to other young girls out there. However, what was the final catalyst for you deciding to pen Love Thy Fro?

CE: A lot of my inspiration to actually do something comes from conversations that I have; conversations with other people and conversations with myself through my journal. I had a conversation with a good friend of mine at the end of August and I told her about this idea I had to write a children’s book that promoted self-love in some kind of way. I said I wanted to do a series of some sort and she was literally like “do it.” My friend’s motto is “Dare to Dream”, inspired by a family member of hers who has a whole brand based around that, and so she was like, this is a great idea, if you put your head down and focus you could really do this before Christmas.

I wasn’t too sure at first but then I thought why not, what do I have to lose? So I just started making plans! I’ve always been someone that likes to motivate and uplift people around me. I’ve said a few times to friends that, in time, I would want to do or create something that would motivate and impact young girls in some way and this felt like a great opportunity to do that. I chose to focus on the topic of hair first because it felt like that was something missing from the UK market, and it’s something that I’ve recently found much interest in.

Dealing with the differences in hair is something that I’ve found all little girls of colour have in common and a battle that pretty much all of them face in some way at some point in their young lives. I know I did. So I thought, yes, I’ll start with this and go from there. 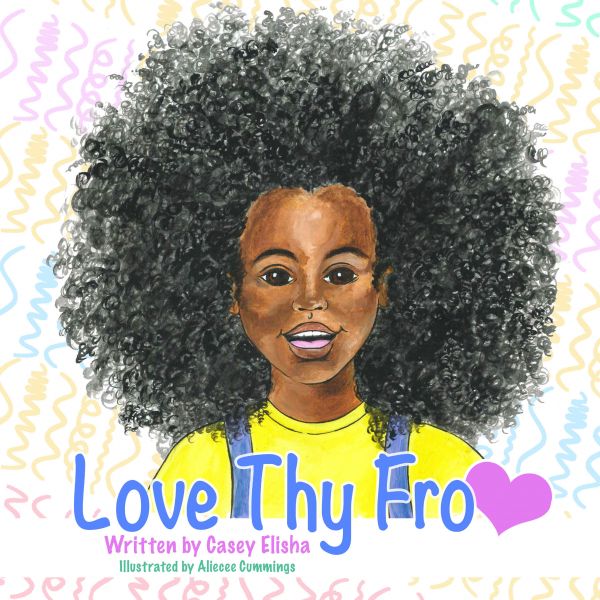 Love Thy Fro by Casey Elisha

TTT: How did you find your illustrator? And what was the collaborative process like? Could you see Kemi in your mind’s eye or is she Aliecee’s creation?

CE: Aliecee is someone I’ve known for a few years now and I’ve always loved her artwork. I always knew I wanted to purchase her artwork in some form so, when I came up with “Love Thy Fro”, I felt like this was the perfect opportunity. Aliecee was happy to be a part of the project and absolutely amazing to work with.

Kemi was a combination of what was in my head and Aliecee’s. She’s an incredible artist so I wanted her to take full creative control of the images. I gave her some guidelines but I completely trusted her and knew she would create something amazing; and she did! Kemi’s beautiful! I love her! Working with Aliecee was so easy. She created Kemi first with some reference pictures before doing the whole book. From the moment I saw Kemi, I knew the whole book would be amazing.

We had an initial conversation to discuss the vision, and I did a book layout with some descriptions of the types of images I wanted on each page, then she sketched those images. After that, she checked in with me and I was happy with them so she painted and placed them and then put the book together. Aliecee is amazing to work with, though. She really worked well to bring to life some of the images I had in my head and was open to any direction I gave her.

Getting Into The Book Market

TTT: How long did it take you from writing the book to bringing it to market?

CE: I had the idea for the book earlier this year, I think, then I started to write little bits of the book during the summer. I then finalised the words of the book in early September, after the conversation with my friend, and we had the book launch on December 6th so it was about 3 months. That was actually not too long of a time because I had to do a bit of market research first and then Aliecee had to do all of the illustrations as well and I needed to allow the printers 3-4 weeks to print the copies in time for the launch. So it was so close, I was scared it wouldn’t happen! I got the books from the printers one week before the launch so I was promoting something I didn’t physically have at the time!

TTT: Did you always know that you would self-publish? If so why?

CE: I knew that I would self-publish this book as I felt that trying to go to a traditional publisher would slow down the process of getting the book out before Christmas. I wanted to have full control of the process and see what the reception was to the book. I also wanted to be able to say that I did this myself. It wasn’t an easy task but I felt it was achievable, so I went for it. I just thought, what’s the worst thing that could happen? And I figured that, self-publishing now didn’t necessarily mean ruling the option of publishing via a publisher at a later date.

Book Industry In The UK

TTT: What are your thoughts on UK publishing industry and its representation of diversity?

CE: Because I knew I would be self-publishing from the start, I didn’t look too much into publishers. As with everything, it’s so much easier to put out any kind of work independently these days thanks to the growth in technology and social media. Of course, you find yourself financially investing so much more, and the work you personally have to do is a lot, but the reward is so much greater.

I feel like because of that, the UK publishing industry doesn’t hold as much power as it used to. Of course, it’s still a huge machine that could be beneficial to any creative but it isn’t always necessary. That’s not to say that I wouldn’t be open to working with a publisher in the future, but I think self-publishing gives you more freedom in the first instance. I would definitely like to see more diversity within the UK publishing industry.

When you compare it to places like America, ethnic minorities are so under represented. Off head, I can’t think of many authors that are of an ethnic minority. When I think about role models and inspirational individuals for the next generation to look up to, I think that’s quite sad that they won’t see any representations of themselves. Many times, children need to see people that look like them in positions of success in order for them to be able to see themselves in that position. I honestly think it helps to promote ambition. Hopefully in time that’ll change, though. I see so many young people of a similar age to me doing amazing things that will no doubt inspire the next generation.

Love Thy Fro RRP £4.99 which is good value for a book that’s well produced. It can be purchased from the website.