A Day Out at Jurassic Kingdom 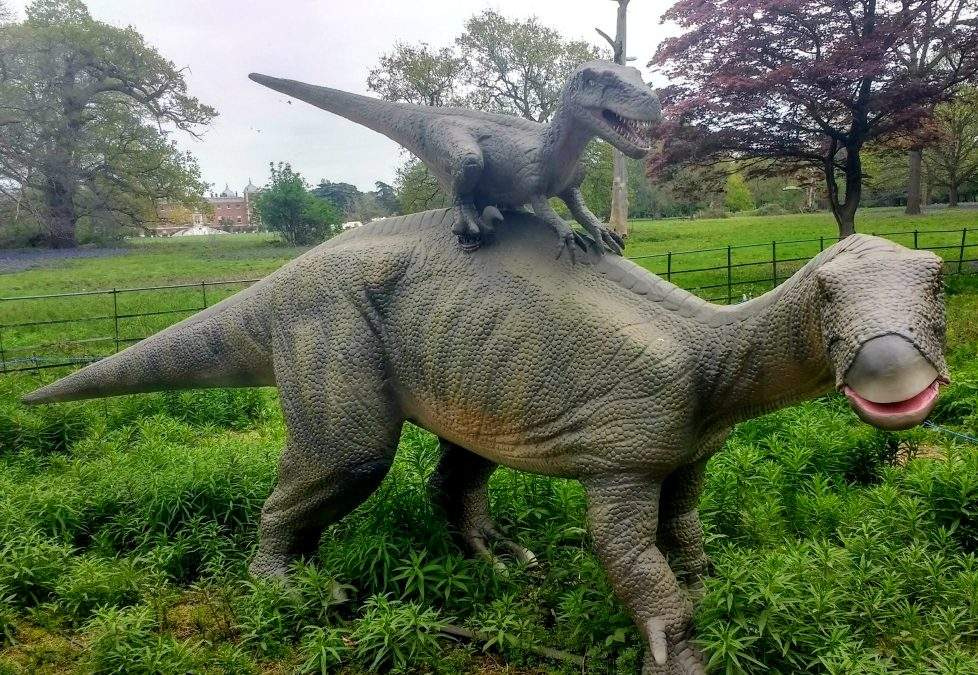 Last term Angelo’s reception class covered dinosaurs. I thought Jurassic Kingdom would be a fun follow-up on the topic. We arrived a few minutes after opening time to ensure finding a convenient parking spot. From our on street parking spot, it was a fifteen minute walk to the Box Office. We collected the complementary tickets that we were given in exchange for this review, then entered the kingdom. I noticed little patrons were so excited, they roared along too. I imagine it must have been a thrill to be in a place where it was not a requirement to keep their voices in check.  Eavesdropping, I was impressed how knowledgeable some kids were about the dinosaur names.  The Tiger Tales enjoyed a prowl around Jurassic Kingdom, Osterley Park, London, on Good Friday.

After passing under the Jurassic Kingdom archway, the fun began. The mighty T- Rex was a few metres from the Box Office. No doubt, his mighty roar pieced the heart of young patrons with fear and thrill in equal measure. He’s probably the best known of the dangerous lizards.  The event shop, food stalls, public toilets and VR experience tent (additional cost £5), along with a few baby dinosaurs rides and dino eggs were also located there. The display is spread out along Osterley Park’s Play Trail and Great Meadow which was an excellent invitation for children to play and enjoy the landscape.

I should mention, in terms of accessibility; the pathways are a mixture of hard standing, grass and dirt track, and temporary plastic pathway. These are sometimes obstructed with tree roots and all pathways have gentle inclines and declines around the event. Angelo and Valentina enjoyed the adventure play areas, especially the Den area made of logs and branches. There were gigantic lizards around every corner and some up above. The flapping Pterodactyl screech could be heard overhead. 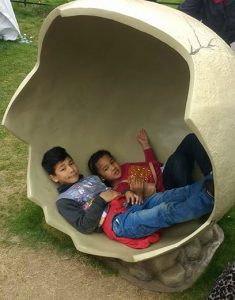 There are over 30 dinosaurs in the display most of which are named and show provide fun facts. The kids and I never tired of seeing their life-like movements; limbs, tails, wings and heads moved! Angelo was excited to spot dinos he remembered learning about, as well as spotting new ones.

Older enthusiasts could sit-in for the 30 minutes long documentary in the Education Marquee.

The Excavation Scene was quite popular with little ones. Valentina loved it. I felt there could have been two of those, because by midday it was already crowded. During that investigative play Valentina found a hind leg of the T-Rex hidden under the sand. I also felt along the way, there could have been additional small dinosaur rides or designated area for them similar to the Excavation Scene.

I’ve been asked if Jurassic Kingdom is value for money. I think it is because I factor in the quality of the display and the space it’s in. Osterley Park is a beautiful Georgian country estate. If you don’t normally visit mansion houses and their grounds, it’s a treat. Its an opportunity to bring learning to life, so to speak. Hubby felt the online family ticket price, £46, was more reasonable, than £52 at the door.

On big day outs, we try to travel light and buy food on site, because we piggyback the kids if they get tried on long walks. An online family ticket and food on site (minus petrol) our day out would have cost £68. Children aged 2 and under enter free and do not need a ticket. Child tickets are ages 3-16. I think the most cost effective to visit Jurassic Kingdom is to purchase the tickets online and pack if you can. National Trust members get 20% discount for with the code ‘TRUST20’. 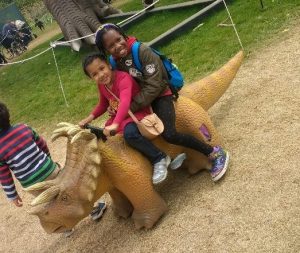 Daysout like this friends can join your or you meet them on site. We ran into friends during along the way which meant he kids had friends to romp with for a while.

For maximum enjoyment, visit the Jurassic Kingdom website and plan your day. The last day of the London tour is Monday 17th, Next Stop; Birmingham Botanical Gardens from 20th May – 4th June.

If you visit, have a roar-tastic time. I’m linking this post to Country Kids From Coombe Mill Easter blog hop.