An interview with Warren Le Platte: creator of the board game Santimanitay 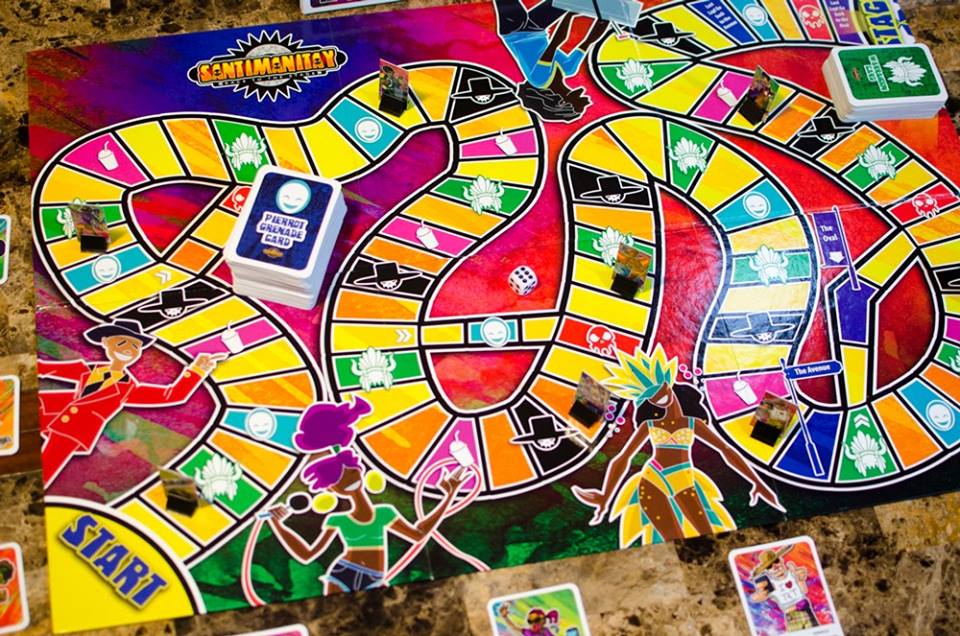 One of the frustrating things about expat life is; when something exciting happens back home you miss out. Sometimes it feels you are forever on the outside looking in, looking at events happening at home from a far, an never being totally at home in your adoptive country. Then other times, the joy of social media bridges the gap and opens a door to step inside and tarry a while. I discovered the board game Santimanitay via Instagram, back in  2016. It popped up on my timeline, Instagram felt its something that would interest me and how right it was?! I’ve never been a Carnival reveler but I’ve always been intrigued and mystified by the history and culture of it. Here was a game that allow me to enjoy the best elements for that great cultural pastime  without gettin’ dus’ in meh face.  I immediately contacted family and friends in Trinidad for more information. The game was still in its infancy and no one could give me details. Then, it occurred to me the best person to speak to would be it’s creator. This my dear  readers is The Tiger Tales’ interview with Warren Le Platte, creator of Santimanitay board game. 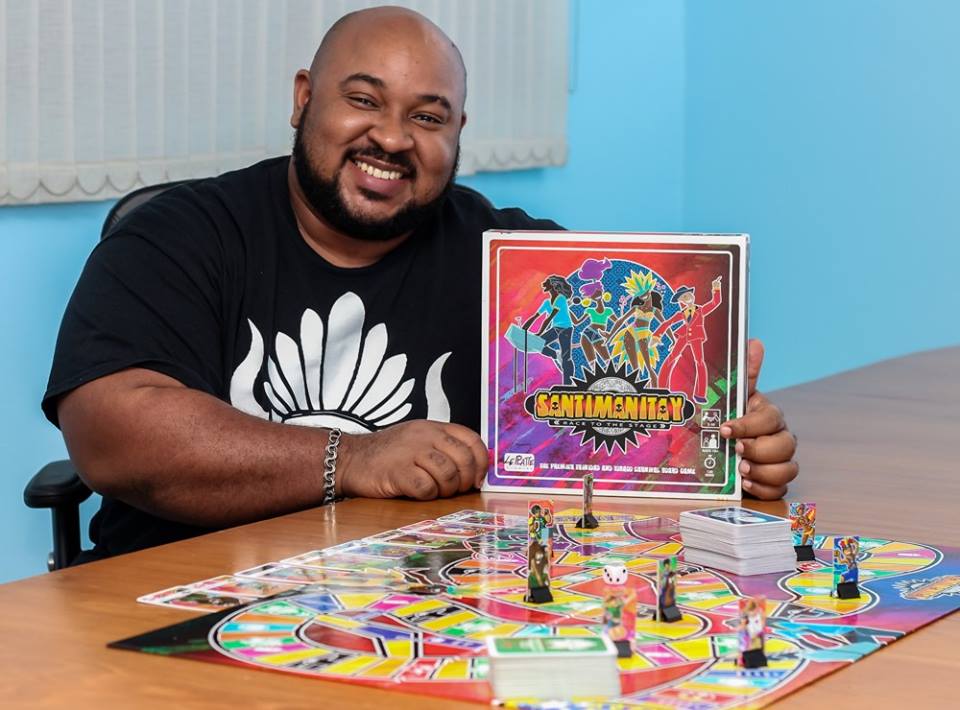 Well… I think I’m awesome! And my mom thinks I’m a very handsome boy! Teehee… Apart from that I’m a graphic designer who sometimes freelance  illustrates, photographs and writes; I’m currently employed at The Daily News Limited as a designer and I’m also a part-time lecturer at the School of Business and Computer Science (SBCS) teaching on the Media, and Graphic Design programmes. And most recently, board game developer. Lover of curry, powerlifting, puppies and pork, I enjoy reading, gaming and movies of various kinds. Sleeping is also a marvellous invention I find enjoyable.

TTT: How did the idea for the game Santimanitay come to about?

The idea of doing something Carnival-related had been tumbling around in my oversized head for years, I was just never sure of its final form (over 9000 hopefully). I’ve produced a number of Carnival photobooks in the past. However, a little over 4 years ago I came across a simple little board game inside of a comic book I was reading at that time, Fables, and it was then that Santimanitay began to take form. I took the inspiration I got from those pages and ran with it. Bouncing ideas off of friends and tweaking mechanics, making adjustments to gameplay and testing, testing, testing. I also treated it as my own personal design project. The goal being that whatever I produced MUST be able to stand up visually and in terms of quality and production, with anything else on the market, from Monopoly to Settlers of Catan to Sheriff of Nottingham. Therefore even if the gameplay itself was complete mess, at least it should look good! Thankfully the game turned out bess, both visually and gameplay-wise.

TTT: Why did you make the game to cater for up to 10 players?

I’m actually not sure I have a concrete reason for the number of players nah… (however, technically, even though the box says 2-10 players, up to 12 people can play the game at the same time depending on which set of rules you follow… but shhhhhhh… it’s a secret). I did not want to have just generic plastic player pieces (wee papa… say THAT three times fast), I wanted people to be more invested in the game and actually have characters that they could relate to and take ownership of. So all of the game characters have their own personality and backstories which help to enrich the game experience. Especially when the people playing actually take on the personas of the game characters. The amount ah ole talk does be passing around, is entertainment in itself! Ent Sparrow say, “De more de merrier”?

TTT: What type of trivia questions can players expect?

Growing up not only playing mas as a child, but also having the opportunity to make and even design costumes for various mas bands, I took for granted the knowledge of the festival I gathered over the years. It came as a shock to me the things that trinbagonian people did not know about their own culture. So then I wondered… what about the people with trini roots who don’t live here or who never visited Trinidad and Tobago, or even those who’ve migrated and have families outside of this beautiful twin-island republic. So the trivia questions range from the easy: “what’s the national instrument of Trinidad and Tobago.” To the VERY easy: “In what year was the first calypso recording made?” but have no fear… it’s all multiple choice, so yuh have a guesser’s chance. And the goal for me was; the more you play the game, the more you encounter the questions, so eventually you’ll know the answers by heart, thus learning about Trinidad and Tobago Carnival and culture. Kinda cool right?

TTT: What’s the most rewarding feedback you’ve received to date?

Various ones actually… after running a play session with a group made up of foreigners, they commented on how much they enjoyed the experience of playing Santimanitay even though they had no knowledge of Carnival, which was very important to me. Another one was in relation to how well-designed the game board and box were and overall high quality of the product. But the one I’m most amazed at is when I was told by a mother, that her (at that time) 7-year-old daughter loved the game so much, she played it twice back-to-back over the phone with her grandmother via facetime; granny lives in Dubai by the way. I was speechless. 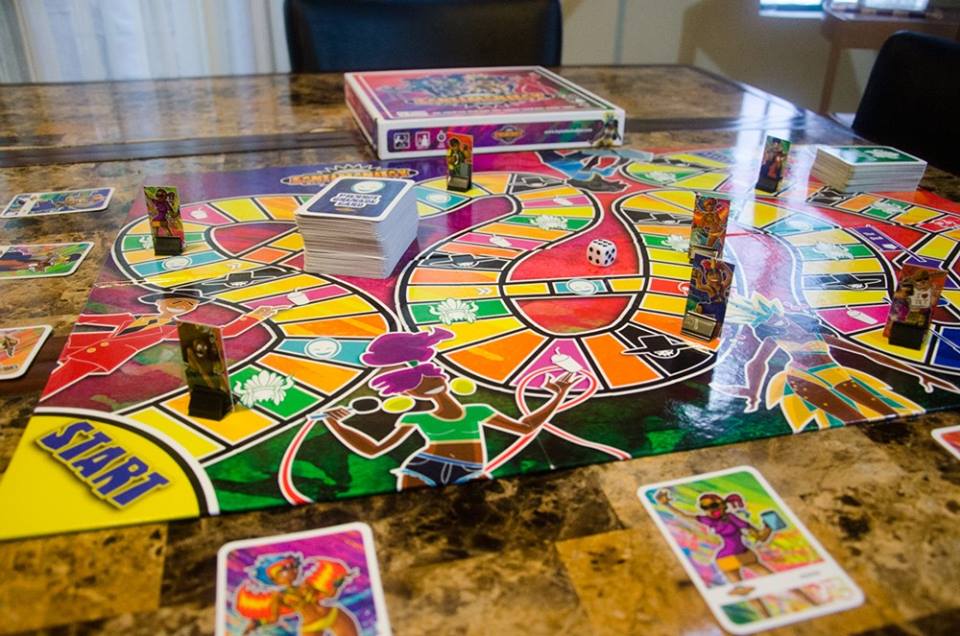 I would have said, yuh is ah trini fuh true if yuh love curry… but I recently found out that there are actual trinis who don’t like curry… this was shocking and disappointing news to me and I feel sorry for them. I hope they get well soon!

Special thanks to Kerhann Jones, James Hackett, Eric Jones, Nabeel Mohammed and Cecilia Thomson. Without them, Santimanity: Race to the Stage would not be where and what it is today.

And thank you for thinking me interesting enough to warrant an interview!

You can find Santimanity on Instagram. Please visit the website for more information on the game. And if you are going to Trinidad & Tobago in time for Carnival 2018, take ah whine fuh me … an’ drink a Malta and Carib too, sensibly of course! Then, tell me all about it. Feel free to comment below in the comment box. Stay safe.