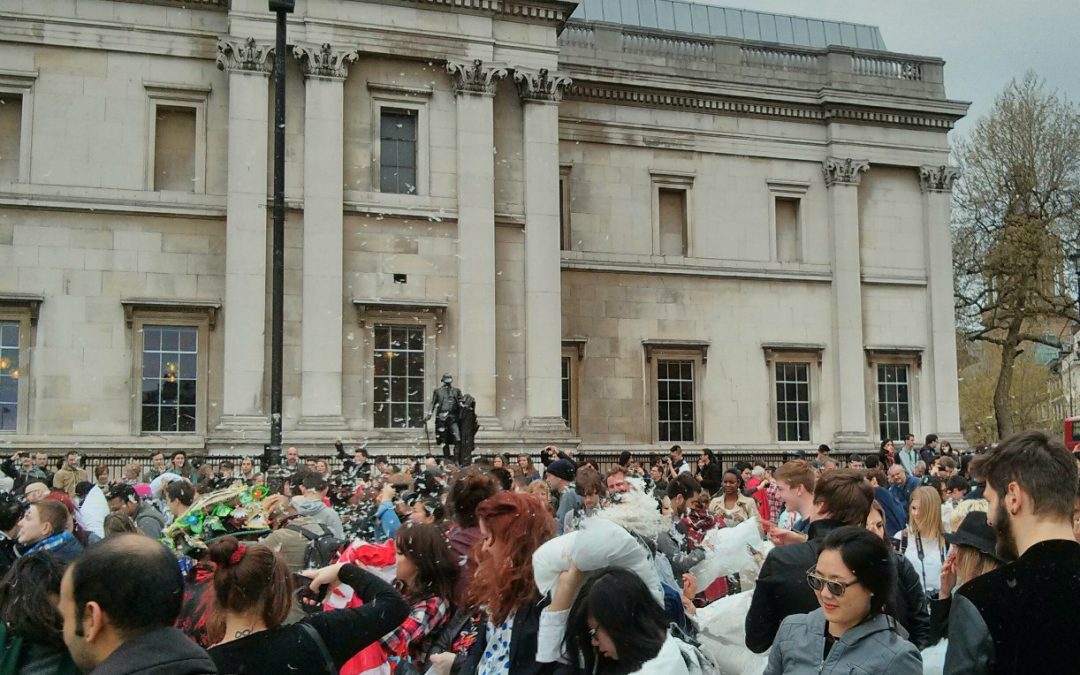 I grew up in an extended family. Pillow fights with my cousins were a fun norm. Then, as a teenager overnighting at a friends’ house we had our fair share of pillow fights too. Always I’d end up feeling totally shattered, with a slight headache and an aching face from laughing so much. Naturally I was intrigued, when my friend Mr N told me that yesterday was International Pillow Fight Day. Sounded like fun but I was a bit dubious.  You know  who’s in a large crowd and what their intention might be. Nonetheless, as I had to met Mr N to collect some bits my mum sent from Trinidad, we agreed to meet at the pillow fight. A friend to have eh?!  He agreed to meet me at a pillow fight. My experience of International Pillow Fight Day was brief but fun.

As I exited Charing Cross tubes station I was confronted with feathers and pillow stuffing on the ground and floating in the air. Suddenly it became clear, PERHAPS, it was  not best idea to meet at the pillow fight. It never crossed my mind that pillows would pop and there would be fuzz and feathers everywhere. It was not an ideal environment for hay-fever and asthma sufferer. In the end I opted to take a few quick pics, get the vibe and make a dash. I have to say although my visit was brief, there was a fun-loving spirit amongst participants and bystanders.

Some participants really made the effort and dressed up in onesies and fancy dress. And yes I did get a bop on my head with a pillow even though I had none of my own to retaliate but I was not in least upset. It was fun and in that brief moment I felt apart of the madness. The pillow was so soft! I wish I had one like that at home…

So what’s all this crazy pillow fighting all about? Well the intention behind the pillow fight and other events organized by Urban Play Ground Movement is to ‘unique happenings in public space become a significant part of popular culture, partially replacing passive, non-social, branded consumption experiences like watching television, and consciously rejecting the blight on our cities caused by the endless creep of advertising into public space. ‘ As an expat living in the suburbs of London, I find this idea endearing. On a daily basis we commute and move around barely noticing who’s next to us, not even making eye contact. Its nice to have a moment in time when people from all walks of life can get together and have fun. Embrace the Spirit of Carnival I say. After-all as they say laughter is the best medicine. It’s even said that laughter protects the heart.

If there is a downside to International Pillow Fight day is the clean job after.  Who knows much it will cost the City of London to clean all those feathers and fluff… but the event FUN though…

Did you attend the pillow fight in Trafalgar Square, London yesterday? How was it for you? Didn’t attend but do you have fun memories of your pillow fights from childhood. I’d love to hear from you.

*Special thanks for Mr N, Man in a Bottle for capturing the fancy dressed revellers.