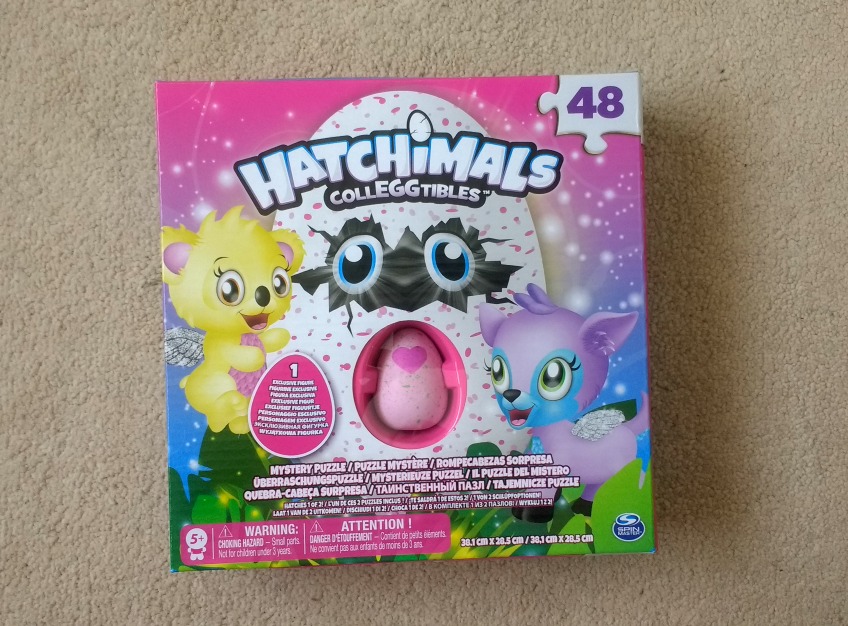 There was pandemonium in the house when Hatchimals ColleggtiblesTM arrived at The Tiger Tales HQ.  The kids wanted one for ages, but I kept our review pack a secret. This time, I was cunning and played them Latin Jazz as they opened the package to confuse them. They were so happy when they unboxed the mystery package.  The kids adore their Hatchimals ColleggtiblesTM pal, Sunshine.

There are different types of Hatchimals packages. We received the Hatchimals ColleggtiblesTM Mystery Puzzle. The thing is it wasn’t really a mystery. The kids worked out that the included small picture/poster revealed what the puzzle would be. They also worked out, based on the puzzle, what Hatchimal was in the egg.

The pack around RRP£6 which is good value I think. Puzzles for 5+ year olds and roughly range between £8-10 depending on the number of pieces included. Hatchimals ColleggtiblesTM Mystery Puzzle box contained a 48 pieces Mystery Puzzle (which is perfect for little hands to grasp and put in place) along with a matching Hatchimals ColleggtiblesTM . The set is aimed at 5 + years.

To hatch your ColleggtiblesTM you have to:

Step 1: rub the heart, when it changes from purple to pink its ready to hatch.

Step 2: Press right about eh heard with you thumbs to crack and remove the top.

Step 3: Dispose of the clear plastic inside and the remaining egg shell pieces above the perforated line.

In our excitement we forgot missed step 3!  Be sure to keep your egg base, so your ColleggtiblesTM has resting spot.

We received the yellow Koalabee in our Hatchimals ColleggtiblesTM Mystery Puzzle pack. Based on the information on the Hatchimals website for his relatives the Koalabee (Purple) and (Blue), I think our Koalabee (who the kids called Sunshine) is from the Desert family. She will nest in the Warming Willow and her flight ability is 3/5. Like the other Koalabees she has also a cute pair of glittery wings.

We don’t have a Willow at The Tiger Tales HQ so Sunshine the Koalabee hangs out on the fairy garden from time to time and she sleeps on Valentina’s bedroom shelf. 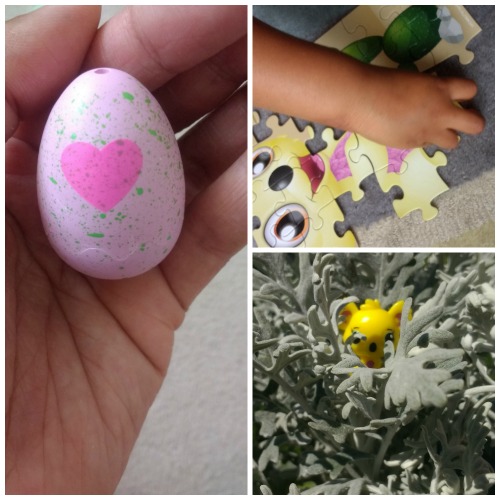 Hatchimals is a Spinmaster toy. They are known for bringing highly innovative children’s entertainment to the market. Hatchimals seems to have taken the market by storm. There something to fit every pocket and occasion.

The Hatchimals ColleggtiblesTM Mystery Puzzle pack makes a lovely present. Little ones have the benefit of strengthen their fine motor skills, problem solving and hand and eye coordination, when they build the puzzle. Then there is the imaginative play they can enjoy with their new Hatchimal pal.

Collect them all and little ones can create their animal world. Visit the Hatchimals website for more information on where to buy them, as well as what different families there are and the world they live in.