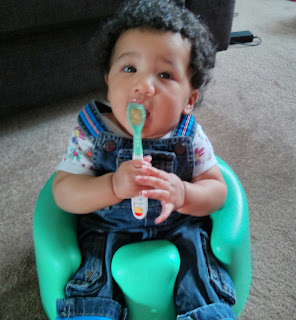 Valentina is now 24 weeks old. At 22 weeks she had her first taste of baby porridge.  I would not say I’d begun to wean her, but I was curious to know if she would sleep longer with something a bit heavier.  RESULT: There was no difference. Perhaps there was not change, because it was a half-hearted attempt on my part.  At 23 weeks she had a bit of banana which she loved but it was more a taste than a feed. Now at 24 weeks I’ve decided to start weaning her.
I’ll admit at this age Valentina is not as curious about food as Angelo was. He clearly wanted what we were eating and would try to grab it. I began weaning him at 5 ½ months.  He was (and still is) quite big for his age. I enjoyed weaning him, with the exception of baby rice there was nothing he would not try and devour.  Valentina on the other hand is still more interested in boob. However, the little tastes of other foods she has been given so she enjoys. She and I will take it slowly, especially because she’s unable to sit up unaided.
I’ve also decided to wean her on the same foods that I prepared for Angelo. He is a strong solid boy and she will need to keep up with him and his antics. I’m going back to root vegetables I know from my childhood (also know as ‘hard food’), such as :
Then I’ll incorporate the greens such as broccoli and spinach, as well as fish such as salmon.
Does your culture influence how and what foods you wean you baby on? I’d love to hear your tale of weaning your baby. Feel free so share recipes too!