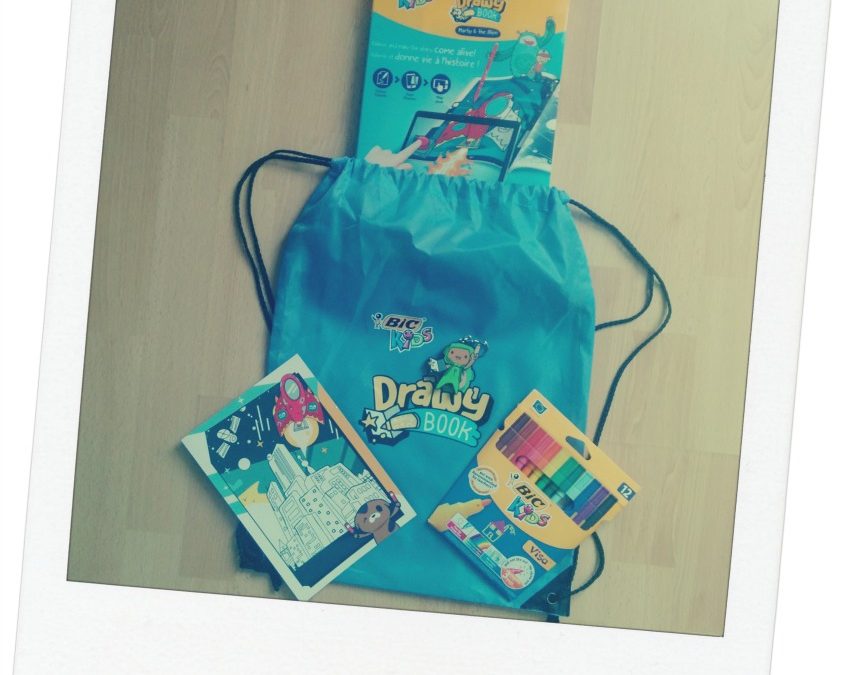 BIC Kids recently launched the Drawy Book. The kids and I were unable to attend the event. They both had chicken pox. We were sent the pack in the post to trial and review. I was thrilled.  I totally love the idea of merging arts with tech. I wanted to see how the story would become animated. After several fumbles we finally worked it out and the results were awesome!  The Drawy Book story Marty and the Alien was story was written by English children’s author Elissa Elwick.  Little Marty loves looking at the sky and the stars. One evening while camping out in his garden, after a large object crashes to the ground he encounters an alien.  Kids colour in various scenes from Marty’s encounter with the alien. BIC Kids Drawy Book is mega fun. Drawy Book is an original gaming experience that allows kids to explore their creative-self and make it come to life via digital technology.

The Drawy Book pack included is a set of 12 children’s felt tipped pens and one copy of Marty and the Alien book. Two of the pens are colour changer pens which allow users to remove or alter colours and create texture. However, this only works with the BIC Kids magic felt pens. I tried the colour changer pens with BIC Kids Visa pens but it didn’t transform the colour. Drawy Book works with an app which can be download for free via Google Play or the App Store. It’s compatible to smartphones and tablets. I’ve got a Nexus 5 mobile, even with a system update I couldn’t find the app on Google Play. Hubby has a Nexus 6P. He was able to download the app. The app includes a game Marty and the Alien story with has a game incorporated in it, then there’s the colouring in story book feature.

Angelo, Valentina and I coloured in and added drawings to the pages of colouring book.

Then, we used Hubby’s phone to trial the app. See videos below.

Drawy Book uses icons which are a call to action. This is perfect for younger ones who are learning to read. They can follow the icons to figure out what to do next. It was created for the 5 – 10 years age group. I feel the book has a broad age span. While 9-10 years olds will be quite good at using the pens.  Some 5 years olds may struggle. Perhaps, if/when Drawy Book has a new book, the age range could be made smaller. Alternatively, there could be an option of select chunky pens. I have no doubt than many 5 years olds are savvy on gadgets. They will be able to work out what to do in terms of using the app. It’s unlikely little ones will complete the colouring in one sitting.

On one occasion, when I sat colouring with Angelo (pg. 14 & 15) he told me her made one of the aliens a girl. By the end of that colouring session, he’d created two alien females because there were no girls. One female alien had magical powers to turn things into ice (spot the Disney Frozen influence). She had frozen the alien behind her. He also said he was not going colouring in the chef’s hat because he noticed when we go to restaurants. Sometimes the people (the staff) wear white hats. It just goes to how creative play helps kids make sense of their world. There are 23 pages to the book. The last three pages are for kids to craft their own spaceship. We’ve not got that far yet, but I look forward to seeing what tales Angelo conjures up then.

I absolutely love the idea and innovation that BIC Kids have created with Draw Book. I’d love to see more books coming out fairy tales, adventure stories. It’s also a create tool that I can see will working extremely well with teaching a teaching aid to extend the children’s’ learning on a particular topic. There is great scope with this digital technology. Drawy Book is available in English, French, German, Spanish and Dutch.