Lovely world of Lulu: a review of the Lulu book series 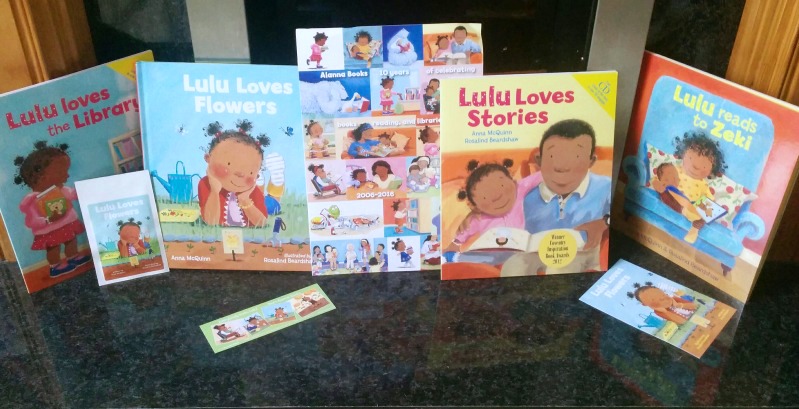 Lulu is 10 years old this year and she’s still a fun-loving girl with a big imagination. I first came the Lulu books last year when I was looking for picture books with range of ethnicities. Later in the year, I met the author Anna McQuinn at Stokey Lit Fest. As fate would have it, we were seated at the same break out discussion table. I totally admired her passion for seeing diversity in children’s books. At our table along with our peers we made a list of ways we felt the publishing industry could change its approach to diversity in children’s books. Lulu has a special place in children’s heart, especially my son. Yes you read it correctly, my son adores Lulu. When he saw the books Anna sent us, he said we must care for them because they are precious. Later that evening he asked me to set with near his night light. I assumed he wanted to see them, if he woke in the night. The lovely world of Lulu is shared through the enchanting stories of Anna McQuinn and wonderfully illustrated by Rosalind Beardshaw.

What special about Lulu? We’ll she does things that many little children like to do. Lulu has the space and freedom to let her imagination run wild. There isn’t anything Lulu can’t be. In Lulu Loves Stories, Lulu flies to exotic places like Paris and Lagos one day then on the other she’s a fierce tiger in the jungle. Where does Lulu get these books, well Lulu Loves the Library, just as my children do. Lulu Loves the Library The story demonstrates how books can ignite a child’s imagination. Little ones can also learn the days of the week and the idea of a cycle.

When Lulu’s family grows and her parents bring home her baby bother Zeki, Lulu reads stories to calm the crying baby. There’s a tender scene ‘while mummy feeds Zeki, Lulu holds her best bear story. She and Mummy read it together. Angelo and I have shared many moments like these when Valentina was a baby. Reading stories has always been a special time between him and I. 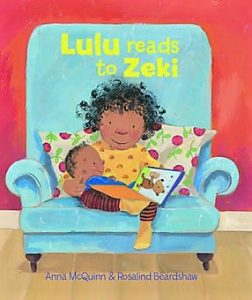 Reading still continues to be a special intimate pastime we share. I’m glad that Zeki has entered Lulu’s world. If it weren’t for Lulu Reads to Zeki, Valentina would have thought the series was for girls only. Perhaps informed toy ads, Valentina seems to have set notion that if there is girl is on the packaging/cover the item is for for girls ONLY.  She’s especially drawn to Lulu because Lulu is a girl with curly hair like hers. Angelo is much more open minded with his interests. I’ve had to explain several times that there’s a family in the book, not just Lulu and therefore the stories are for girls and boys. Like Lulu both Angelo and Valentina like sitting with their most loved books and pretend to read.

Lulu Loves Flowers arrived with a packet of seeds. In March we tried our hand at planting again, sad to say those seeds didn’t take. However, the activity has rekindled Angelo’s and Valentina’s fire to plant something. Lulu was inspired to plant because of her love of the nursery rhyme Mary Mary Quite Contrary. 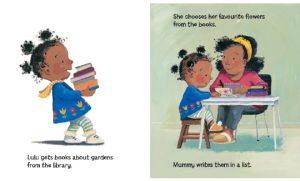 Once again she’s off to the library to research into flowers. After she has selected the ones she wants, she soon learns that flowers don’t grow over night. She does craft to pass the time.

The Lulu series is an endearing collection of stories that boys and girls alike will enjoy. In Lulu they will find a kindred spirit to share their childhood.

For more on Lulu and other books by Anna McQuinn, please visit the website .