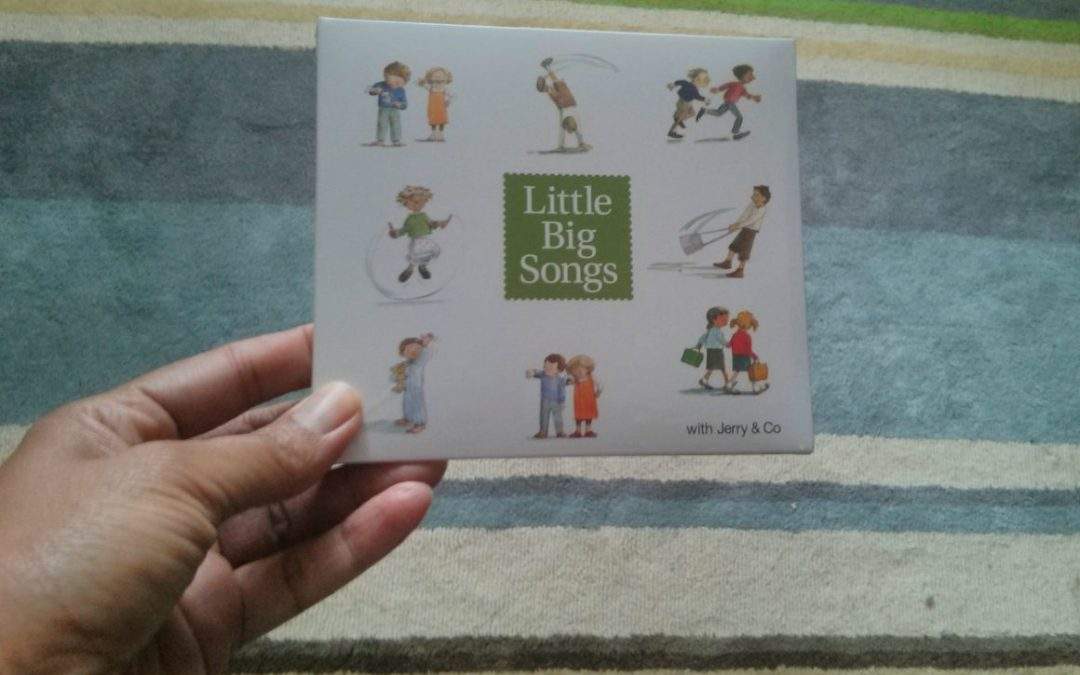 My children like most children love music. I try to strike a balance between fun age appropriate songs and the pop song they may hear on the radio. Like me their dad and I they love anything with a bit of rhythm and base but they also enjoy their nursery rhymes. I was keen for them listen to the Big Little Songs CD as I knew it was suitable for pre-preschoolers. Big Little Songs is nothing like we’ve ever listed to to do date it took us a few listens to get into it, and that we did… enjoy it.

In my experience preschool music CDs can either be either a bit party-mode or sleepy-mode, Big Little Songs fits in between these styles. I think that’s the reason it took the kids and I a little time to get the essence of it. I first played it for Valentina. She 18 months and will dance if two spoons are knocked together (well not literally but you know what I mean) but she showed no sign of noticing this music. She carried on as usual playing and doing her own thing. Then I played it for both Angelo and Valentina. Angelo is 3 years old and attends daycare part-time, three days per week. I note this as I’m sure he hears other types of nursery rhyme CDs there. Valentina did her own thing again.  At first I thought he wasn’t listening either but then I heard him sing along to ‘What’s the Time, Mr. Wolf’.  Then, I realised he was listening he just didn’t know any of the other songs.  On the third occasion, I allowed him to listen to the music online on his Samsung tablet,  while watching the clips that accompanied them. By then he was a little more familiar with the tracks. Although he didn’t sing he made mention to germs when listening to the ‘Scrub- a- Dub’ song. When asked if he liked the music he said yes he did, “because I like songs”, he said.  He listened to all of the songs but chimed in again to his favourite, ‘What’s the Time, Mr. Wolf’.  In time, he will know the lyrics of the other songs and enjoy the music all the more for it. Valentina was still not into it but I realize it’s a bit too advanced for her, at the moment.

I would say that the style of Big Little Songs music is a bit folk. It’s acoustic sound is calm but not boring. It will not hype-up  the children and make them jump around. It is in fact slightly more mature that the usual CDs. Its preparing them or rather helping them to understand their world at the stage they are at.  Its best suited for 3+ years because at this time as parent, we are starting to think about primary school and also preparing the kids for this as well.   As a parent, what I like about Big Little Songs is that it’s true to life.  ‘Scrub-a-Dub’ is a great song. I’m partial to it as I always have to explain to Angelo why he has to wash his hands. A song like ‘Scrub-a-Dub’ is a great back up. Boys like to learn but don’t like to be told. A song like this is fun but sends the message home too. I also like ‘In the Family’ it simply explains relationships and proximity to children. The bulk of my family and hubby’s are still in the country of our birth. Our children have yet to meet most of our family.  I find it difficult to explain to my children whey we can’t see our family and friends often. They are so young but ‘In the Family’ makes reference to that part of life so effortlessly. ‘Ooh, That’s Lovely Grub’ is an excellent make children away of different types of food that different families eat. We are a mixed heritage family and I appreciate anything that notes and places value on diversity. The last song on the CD is ‘Goodnight, Mr. Moon’. This is a fitting end to the compilation. If the children are listening to the CD late evening then it can prepare time for bedtime. Big Little Songs is a delightful CD that you ‘grown up’ little ones will grow to enjoy.

As I stated earlier Big Little Songs is available online.  They are accompanied by illustrations from the Manchester-based artist Peter Seal and are assembled as song videos on the Little Big Songs website for free. In summary:  Little Big Songs CD and website were released 04/05/2014

• Story-songs about real life, that children immediately relate to and love to listen over

• Four delightful song videos to enjoy free from the website

• Song videos based on original illustrations by artist Peter Seal

Please note that this is not a sponsored post, however we were sent the CD to listen to for the purpose of this review.