Beach life in the summertime with family 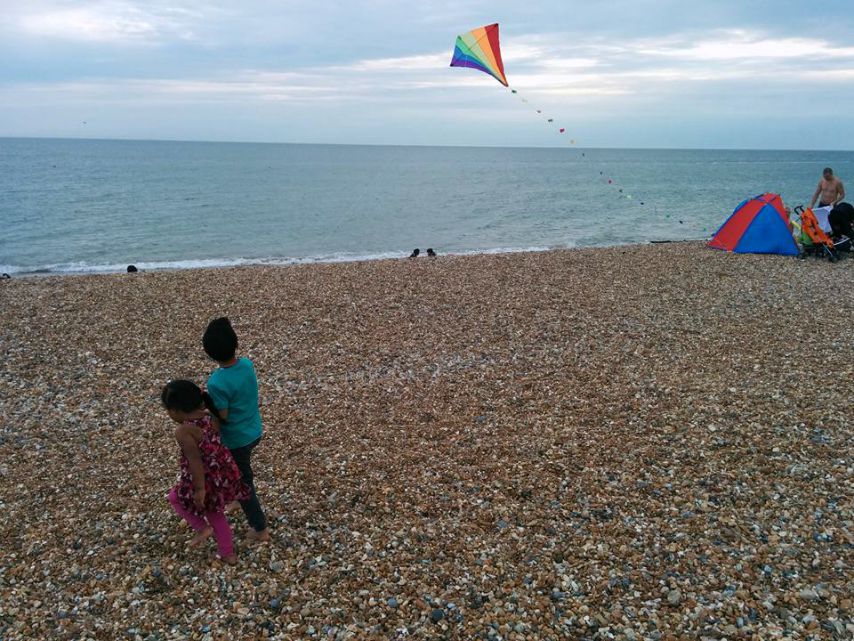 I love love love the beach. Even as child, a trip to the beach was a dream come through. I remember saying my prayers in earnest,  if the rain began to fall on the day my family had a beach trip planned. Last Saturday was lovely and warm; so, when Angelo said he wanted to go to the beach we made plans to go.  We ended up at a pebble beach in Hove. It was crowded but not as much as I suspect Brighton would have been. Families, couples and friends all laid on the pebbles chatting and sun-bathing. I’d taken buckets, spade and other sand toys but they were of little use with the pebbles. I admire the imagination and creativity of children. Instead of sand play Angelo and his sister Valentina slid down the pebble dune and had lots of on the beach, that’s the beach life.

Upon arriving at the pebbly beach, Angelo and Valentina slid down the dune. They collected interesting looking pebbles, admired their shapes and colours, as well as, sea shells. I couldn’t believe it, but they even bathed in the water! I’d taken them down to the shore to dip their toes in, to my alarm the water was ice cold. I promptly took them back up the pebble dune to their dad. They begged him, so he took them back to the shore. They went into the water!

Children must have a special skill to adapt their body temperature. Ang and Val stayed in and bathed and played.  As much as I love  them  and as much as I miss sea-bathing, there was no way I was going into that ice cold water.

The children and their dad ended their time at the beach flying a pretty little kite. I’ve always liked kite flying but I never had a real one. As a child I tried to make kites with writing paper, they never got very far. It was relaxing looking at the three of them flying their kite. At one one point Valentina even had her turn to hold the kite and let it fly. She was so proud of herself. I was pleased for her.

Playing on the Sea Shore

Valentina is happy when she does something new on her own. Just goes to show, you don’t need sand to have fun on a beach. As for me, I was happy to sit on the dune and record our trip in pictures.

How so you spend your time when you have a day out to the beach? I’m linking this blog post the Country Kids of Coombe Mil blog hop.