Baby on the move: how a toddler deals with a crawling sibling 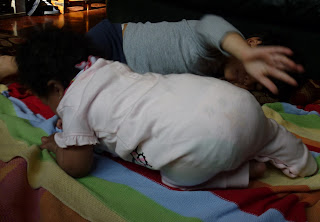 Valentina is well and truly on the move! She first went up on all fours when she’d just turned 6 months, while her dad was on a working holiday. On his, return hubby was amazed to see her test her strength on all fours in preparation to crawl. She was doing a jerky swaying front to back movement. Angelo was the most surprised of all. He let out a gasped the first time he saw her commando crawl.  He was totally gobsmacked that his baby-sister could move. 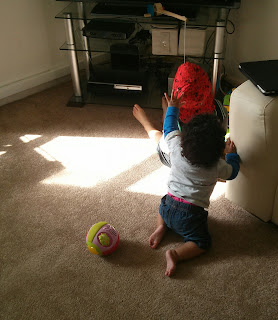 Prior to Valentina learning how to crawl Angelo treated her like a rag-doll, if not caught in time. Sometimes he’d use her as part of his obstacle course, run and jump over her!  Sometimes she was a stepping stool. Let’s just say, that hubby and I have had to have eyes sharp on him since Valentina was born. I think because she could not move and cried he found her presences a bit annoying. He would sometimes mock her cries.  Now that she’s able to respond and give him some attention he values her presence. He can ‘make the baby laugh’ and that makes him proud. While he’s amazed by her crawling and laughter, he’s still gets annoyed with her sometimes. Now that she’s trying to stand, he gets very cross when she reaches up and pulls his hair or his Angry Birds cap. 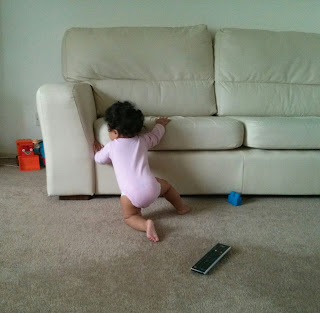 On the occasions when Valentina sets off on her own to explore her home, Angelo will usually ask “Where’s the baby gone?” He knows Valentina is his sister but he’s too young to understand what it all means.  More often than not he’ll refer to her as‘The Baby’.  Now that she’s on the move, he relishes telling her off when she wanders somewhere she ought not.  Heaven forbid she should join him playing with toys, its “No NO baby, my space!”  I take responsibility for the ‘my space’ demand. I often tell him that, like a sponge he is.
Hmmm, I wonder how he’ll respond when she walks…