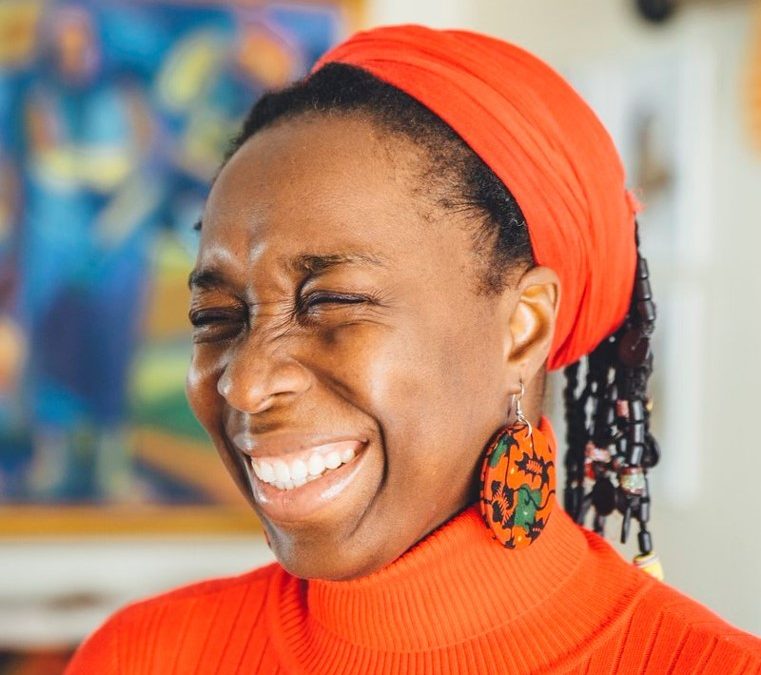 My first experience of Nigerian cuisine was back in the 90’s in Trinidad. The restaurant as called Festak (if memory serves me well) and the waitress who served us was a bit like Ursula Buffay (Lisa Kudrow) from comedy Mad About You. I remember the service more than the food. I don’t remember what I ordered but I do remember her returning to my table to say she’d forgotten the nuts, then hastily sprinkled some peanuts over my dish.  It was such a random hysterical experience that I can recall it to this day. When I hard about ‘Longthroat Memoirs’ I was eager to read an authentic experience of Nigerian food. The first thing that struck me about the book was the humor, followed by a few similarities of certain spiritual beliefs to what I’ve heard as a child growing up in Trinidad. The Tiger Tales interviewed Yemisi about her work. Here is her interview.

TTT: Tell us a bit about yourself?:

TTT: When did the idea for Longthroat Memoirs become so strong that you knew you had to write the book?:

The book proposed and wrote itself – it stole past my appraisals of my own abilities, because I had no confidence to decide that I was going to write a book, then sit down to do so. The boundaries of my belief in my competence ended in writing long rambling essays published online, or in the magazines that would accept my work. And those essays were not about food. By the end of two years of writing a food blog for 234Next the Thursday paper, I realised that I had something resembling a book and approached very tentatively Bibi Bakare-Yusuf, Cassava Republic Press’ publisher. So my answer to the question is that the strength of the desire to have a book in my name only came after the fact of having written enough words that suggested the existence of a book. I won’t say Longthroat Memoirs the book took me by surprise but if I had decided that I wanted to write a book, and made lots of well-laid plans around the writing, I probably would never have written one.

TTT: When and where were you most productive when writing Longthroat Memoirs?:

I need a lot of silence and space in my head to write anything worthwhile and for many years could not write on that account. I am most productive when I am left to myself in a quiet room: when people are making no demands on me, and I have many hours to think about things. I have children, and I care for them myself, so those conditions don’t really exist and that quiet room comes and goes very sporadically. It makes no sense for me to wait for the timing and the conditions, but I often find myself doing so, and becoming frustrated in the waiting. In order to finish ‘Longthroat Memoirs: Soups, Sex and Nigerian Tastebuds’, I had to endanger a business which I ran for many years – take all the money it had in the bank and rent a space that allowed me to work without justifying my evil-tempered silences and long hours in one chair to other residents of the space. I find that what is going on in other people’s heads often affects me even if it is unspoken, so any serious creative work that I need to do must be minus the physical presence of other people, no matter how well intentioned or loving.

TTT: Have any readers outside of the African continent commented on noticing similarities in their own cultural customs and/or spiritual beliefs from those you have shared in Longthroat Memoirs? If so, what?

On the contrary, I have had a lot of “who would have thought!” Longthroat Memoirs is constantly taking readers by surprise because there are so many dissimilarities, so many unique points of difference between this one country in Africa and the rest of the world. Differences that no-one has really bothered to write down or take to heart because they are not negative or terrifying; not burning holes in our ears. This is true even between Nigeria and other African countries. Even among ourselves in Nigeria, we are marveling at our differences (what a relief when they are positive, when they are about food). A friend recently told me a story of why clouds are so far from the ground – this is a story told to children from Northern Nigeria, I come from South-west Nigeria. The story goes that women would take clouds and pound them with pestle and mortar and eat them, and the clouds were compelled to move far away from the earth – a loss to those of us who love walking with our heads in them. Even at this age I am fascinated by the imagery of clouds being pounded in a mortar and think of the parallels in appearance between pounded yam and pounded clouds – I am resolved to put it on paper – to justify my love of pristine white food – Brie, Okro seeds, fried wara (our version of cottage cheese). I love the idea of eating clouds – who wouldn‘t? They are soft and white with no calories! I lived for all of my childhood in Nigeria and never heard this story. I am glad for the opportunity to write a food exposé revealing differences between us and the rest of the world because without those differences it can be and has been presumed that we have nothing original to offer as a country, as an extraordinarily culturally diverse country with our own food rationales. Like I said at the beginning of my book, Nigerian food is a treasure trove, still being mined. So my answer has to be that very rarely have I met people outside Africa who handle food with the same beliefs as we do, or own similar spiritual beliefs. I am sure such people exist, but I haven’t met nor have been approached by many of them.

TTT: To a reader who has never tried Nigerian food, what dish would you recommend from those mentioned in Longthroat Memoirs? And why?

I would recommend Ekoki for sure. When I first encountered this food in Calabar, I was told that it was disparaged by its owners because you could buy it for N2 at a time in the past. It was market food and there was supposedly nothing special about it. I disagreed and still do so very strongly. Ekoki is ground maize (I prefer fresh maize) mixed with ingredients of choice, I like fresh king prawns and chopped leeks. I also add a bit of coconut water, palm oil, salt and ground Cameroonian peppers. The mixture is steamed in thaumatococcus leaves – and I won’t say how many wraps of this beautiful steamed food I can eat in one sitting. More than that, the steaming and the percolation of aroma in the house is an amazing experience in and of itself.

I thank Cassava Republic Press for opportunity to be a part of the Longthroat Memoirs: Soups, Sex and Nigerian Taste Buds blog tour. Next stop The Writes of Women, 1st December, 2016. You can also join in the conversation by following hashtag #readcassava and #LongthroadMemoirs .