An interview with Mylo Freeman author of the Princess Arabella stories 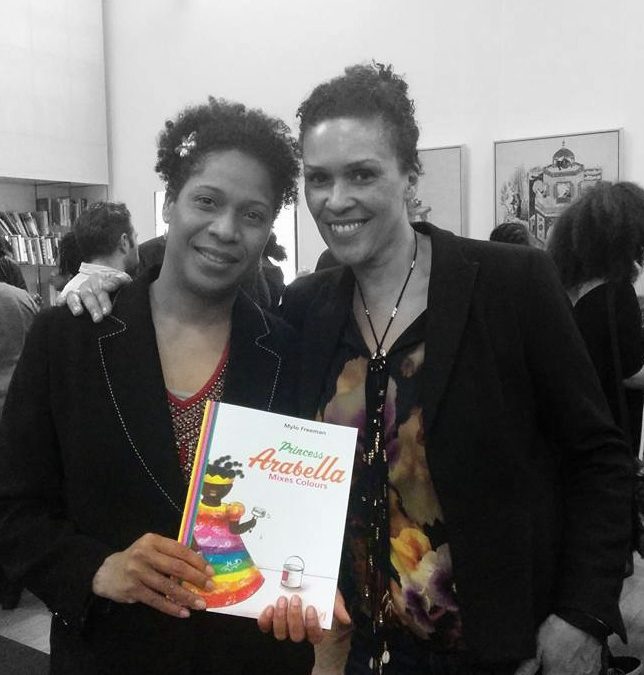 Last week I attended my first book publishing event. It was hosted by Cassava Republic publishing company.  Oh what a joyous affair it was because it was in celebration of Cassava Republic coming to London, after ten years in the publishing industry. They now have a Nigeria office and UK Office.  Prior to attending the event, I’d received an email introducing me to the work of Mylo Freeman, children’s book author and illustrator. I seized the chance to have an online interview with her because  I was intrigued by her own story behind the Princess Arabella books. At the event I had the pleasure of meeting Mylo and purchasing her books. My children love Arabella especially Princess Arabella Mixes Colours Angelo said, ‘aww mummy you bought it for me because you know I love rainbows’. Indeed that was one reason, but more importantly I wanted them to get used to seeing non-white people on the cover of their books.

1. Tell us a bit about yourself, have you always been a writer illustrator?

I was born and grew up in The Hague, Holland. My mother was a Dutch lady and my dad an African American.There were so many things I loved to do like singing ,playing the piano. Before I became a writer/illustrator I did some modeling and made a CD. Although I loved books, I never thought I would be an illustrator/writer for children’s books. In my mind an illustrator would have to be able to draw all sorts of things like bicycles and buildings, something I thought I could never do.But luckily you can create your own style and then it’s actually possible to draw anything you like!

2. Are you a self-taught illustrator or did you attend an art school?

I attended art school, something I enjoyed a lot! There was an opportunity to follow lots of different classes, like painting, graphic design and of course illustration.It was a wonderful time to learn and make friends forever.

3. In your years as a full-time writer and illustrator, what has been the most rewarding part of your career so far?

By far the success that my series of princess Arabella has is the most rewarding thing in my career as a full-time writer and illustrator. A friend of mine told me story some ten years ago about a little black girl who didn’t want to accept the role of princess in a theatre play, because in her mind there were no black princesses! To her a princess was supposed to be blond and blue-eyed. This was such a shock to me that I decided then and there to make a book about a black princess, a character that I felt passionately to take into the world. And this is exactly what happened, only now I sometimes feel that Arabella takes me into the world. She has been published in so many countries already and there’s more to come…

4. How are your non-white characters received by your reading audience?

The wonderful thing about Arabella is that she is received really well by black as well as white audiences. I think everyone can connect with her. Black and white, boys and girls. She’s a strong willed, funny, princess who knows exactly what she wants!

5. Do you notice a difference in getting book with a non-white character at the heart of the story published?

Personally I’ve had no trouble getting Arabella published. I see there’s some progress in getting more Black and Asian characters portrayed in children’s books. But there’s still not enough books where they’re the main character. They shouldn’t be just on the sideline but leading characters.

6. What do you hope to achieve with the Princess Arabella stories?

It’s more than important for children to be able to identify themselves and to feel included in this world. This quote says it all:

Princess Arabella Mixes Colours  and Mylo’s other books are available at all good bookshops and online retailers.