An Interview with Etienne Kubwabo: author of Beats Of Wars Comic Book 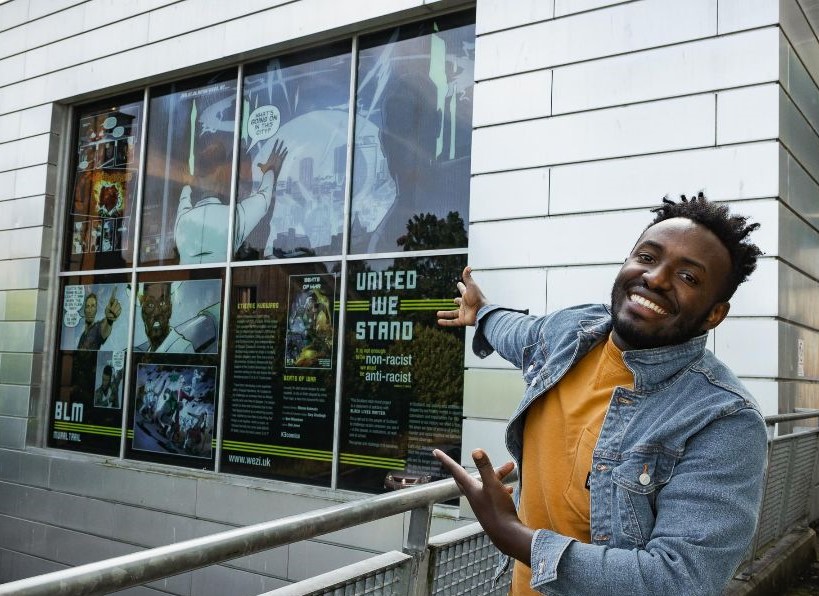 Etienne Kubwabo is a Congolese/British film-maker, writer who has gone on to write, direct and produce award-winning documentaries, short/full-length feature films and over 120 music videos. Most recently, Etienne Kubwabo created Scotland’s first-ever black superhero (Beats of War) – DJ E.T and have already appeared on BBC’s The Social, BBC Radio Scotland and STV’s national news. He already has plans in motion to move forward into the film. DJ E. T’s journey is only just beginning. This is Etiennne’s interview.

What was your favourite book as a child and why?

My favourite book was Adventures of Tintin. Growing up I remember we had access to a video cassette of Tintin and the book. It was in French, and at the time I struggled to read but the book had amazing visuals that made me understand what was going on. When I grew up and reread it, I realised that I was right about the story.

I loved the whole idea of a young kid going on adventures and discovering the world, to me it was a big dream. I knew that one day I too would be travelling the world but I dreamt about it and now it’s happening.

How has your expat life influenced your writing of Beats of War?

I mean growing up, I’ve always been close to my family, especially my brothers and sisters.  We used to have an old broken television boxes (like ones in the 80s), but the inside part of the TV was not there, so I pretended to be a news anchor and read fake news to my little brothers and sisters.

Then we moved to Scotland, which was a big shift for my family and I, BUT living here as a new home was both challenging and amazing. I met a lot of amazing people from college, universities and this helped me integrate, but I also faced high levels of racism, that made me think about my life and how I wanted to communicate with the world on exactly how I felt inside.

So instead of fighting with the police for stopping me 9 times in a week or screaming at someone following in a shop, I decided to create a comic book story. My character would fight all these injustices and bring people together through music too. Storytelling became my saviour until today.

Part of Beats of War was displayed as part of the Black Lives Matter Mural Trail, in Scotland, what piece did you select and why?

I selected the front page, because it shows the character and also the two worlds where the story is taking place.  I felt it was important for people to see these two worlds that I am trying to unite.

Then, I chose the third page to represent how powerful this character is after saving people in an accident. And finally the 12th page because it shows the city which is the backdrop of the story. 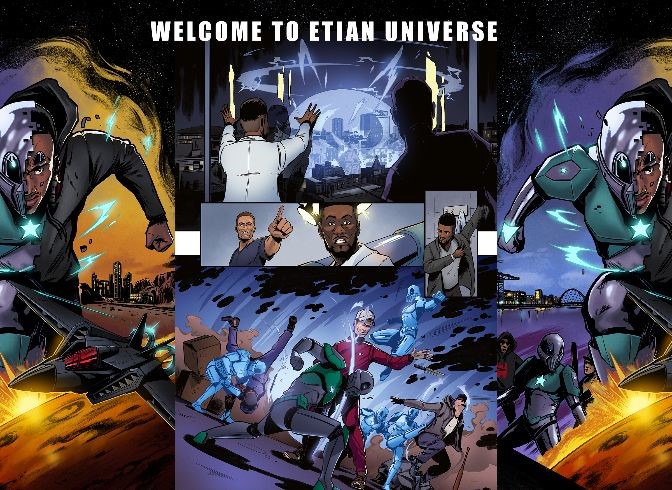 Did you have a particular type of reader in mind as you wrote Beats of War?

When I wrote Beats of War, I had my young self in mind when I was writing it, and also all young and old people struggling to fit in the community or society that they live in. It is for ages of 12 and up, but also lovers of science fiction and comic books.

What advice would you give to parents for getting their sons to read more?

Advice to parents: Encourage your kids to read more, because I think it opens up their minds to understanding the world now and the future. Even if they are not into comics, it can be a book of science, technology etc.

Every great person in history was a reader, so it shows that great knowledge lies with the books.

What would you like your legacy to be as an author?

I would like my legacy to be a man who brought humanity together through film and comics and also inspired the young generation to be the best version of themselves.

You can find Etienne on Facebook , Twitter  and Instagram . I hope you enjoyed this interview and if you have read Beats of Wars, tell us your best bit.