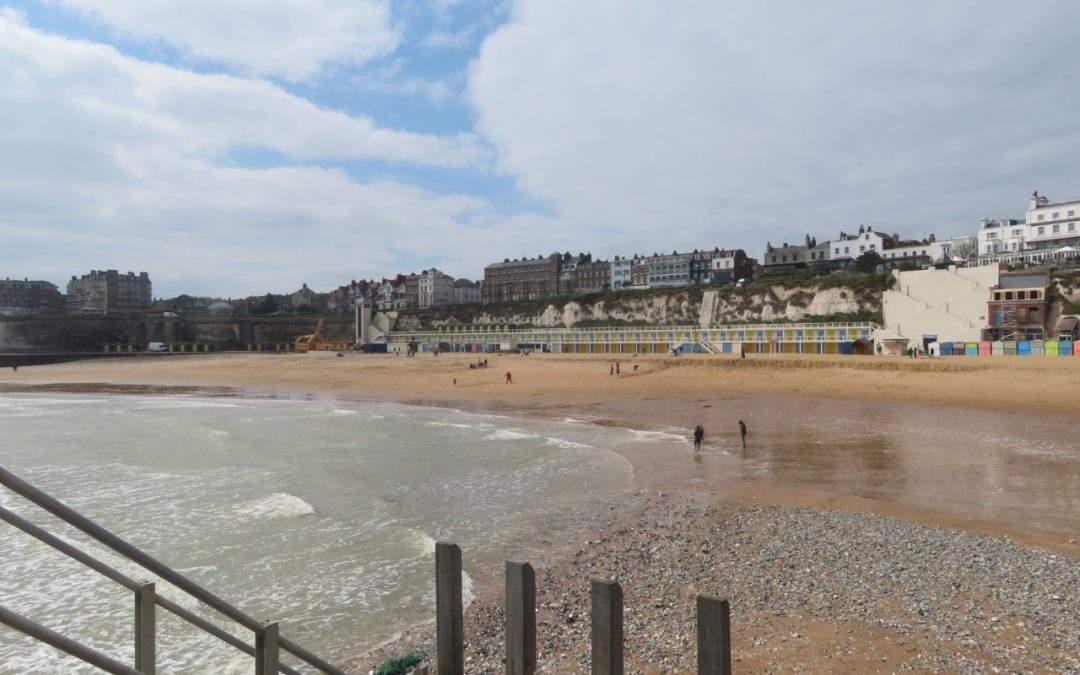 When hubby told me he had taken a few days off, while the kids were on Easter hols AND he wanted to go away for a couple days I knew our destination… Broadstairs.  It’s been ages since we’ve been to Kent. Broastairs has been on my list ages. He agreed and said we would overnight in Canterbury. He was pleased as punch that he found parking in advance at both sites via the Just Park app.  Parking 10 minutes’ walk away from Viking Bay Beach from 10am – 8pm costed £10. We spent 5 delightful hours exploring the environs of Viking Bay Beach, Broadstairs. 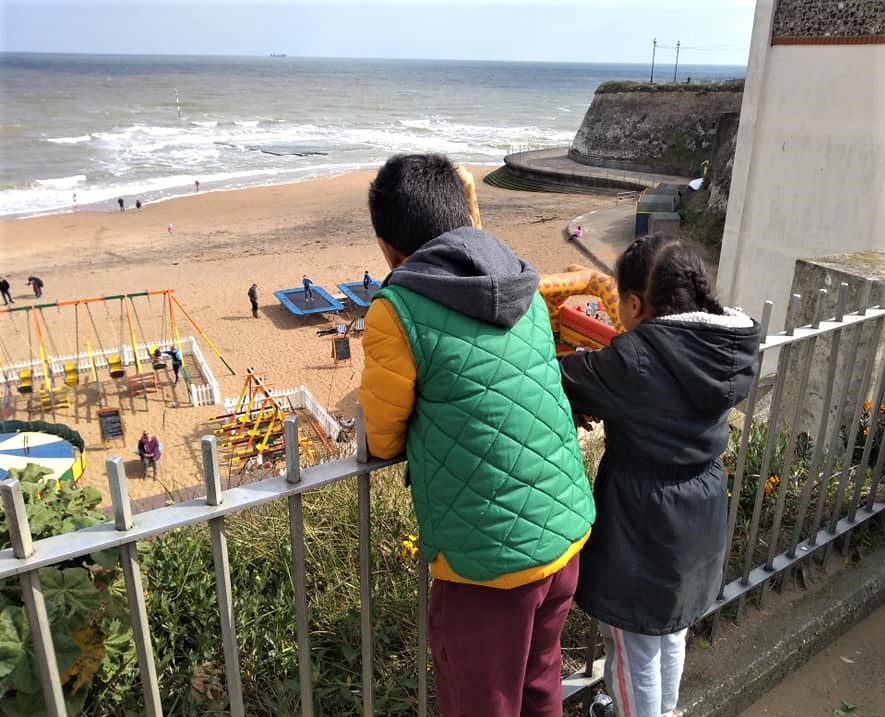 We arrived on the Viking Bay Beach just before midday. Armed with camping chair, picnic blanket sand toys, a ball we setup camp on the sandy shore. Viking Bay is a bucket and spade beach. The kids easily spent a couple hours playing in the sand. It was not a day for swimming.

The day was bright, windy and chilly day. What a combo, right? I noticed the coastguard boat had a time cutting through the rough waves. Not one for sitting around, I left hubby to watch over the kids frolicking, and set of for a walk. There were £1.50 bouncy castle, trampolines and swing rides but the kids were happy playing in the sand. I think the rides are a regular fixture on the beach because I saw postcards of Broadstairs that featured the rides.

NB: There are quite a few stairs to go down to the beach.  The seasonal lift  works from April to September.

I walked across the shore up to the seaside seafood café. From my vantage point, I could see the entire picturesque shore of Broadstairs.  Cute with neons, greys and blues beach huts stretched along the perimeter backing onto the chalk cliffs, on the shore. Behind the café, there was the stunning expanse of the wide open sea.

Normally, I plan the site-seeing but because the either was bad in the lead I up to our tip I didn’t. It worked out well in the end because during my walk I discovered the Dickens connection to Broadstairs. Bleak House was his home.He last stayed there in 1859.

As a fan of the book and TV series, Bleak House quickly went on to ‘Must See ‘List.

Eating Out in Broadstairs

We walked up from the beach onto the promenade then along the narrow winding streets pass boutiques, books and coffee shops to Aqua 43.  Aqua 43 is located on 43 Albion Street. It’s a family run, family friendly restaurant established in 1972. The decors comprised of cool silvers and soothing beach blues with big mirrors, ceiling fans and seaside themed paintings.

My haddock and chips were cooked to perfection; crisp light batter, tasty fleshy fish with chunky crunchy chips that had a soft fluffy centre. Hubby and the kids had cod and chips which they polished off quick time. Service was good. We left happy on a high only to be brought crashing down at Morelli’s Gelato.

Trip Advisor ratings we good so went and were sorely disappointed, at Morelli’s. The attendant handled the wavers with her bare hands even though it was clear she had a cold AND topped our ice-cream with unwashed fruit from a packet. We only ate the ice cream which was tasty but our experience was already spoilt. On our way out patron who sat with a burnt tea bun on her plate, told her family she would not return. DITTO!

Since our visit, a new eatery has come to Albion Street! I have yet to visit but it looks divine.  Well, I say eatery but to be precise its a bar and lounge. Reign Bar & Lounge is a stylish contemporary Art Deco inspired décor. They serve coffees, teas, and serve up grazing boards of cheese fruit and more. If you get the before me, do drop me a line tell me how it was. 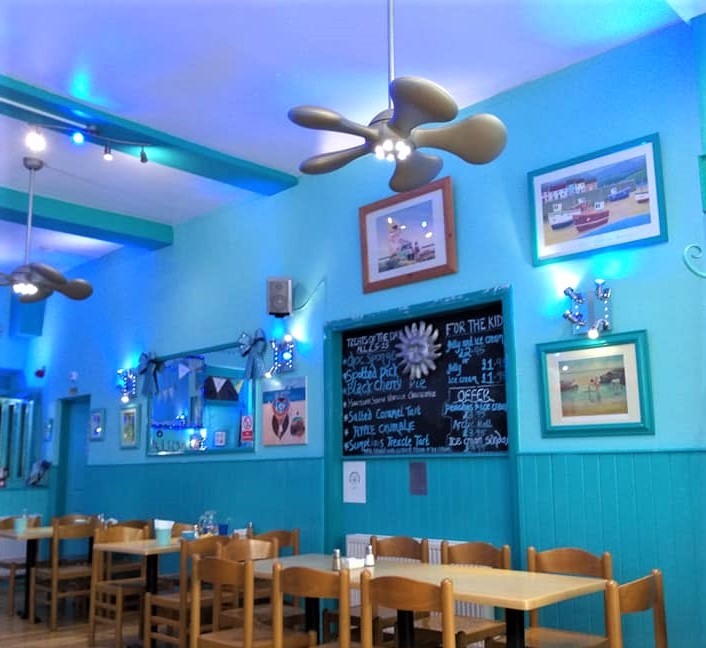 Now, you can’t do a trip to a seaside town without hitting the games arcade. We popped into Broadstairs Leisure, on 4 Harbour St. It was family friendly, clean and well lit. The kids played a few games and went on a couple small rides. I hit the 2p Coin Pusher Arcade Games and won a few tickets for prizes.

Up on the hill, from Harbour Street majestically stood the Bleak House, Fort Road. Once again, I spiIt from my fam to go exploring. The garden wall must have been at least six feet high because I could see over it. On the street side, the wall was decorated with large sea shells like Abloni, Cowrie and Clam.   At the back of the building there was a board with a brief info about the established. I enjoyed the sea view for a moment before descending to meet my family.

The house was built in 1801 and was the home of the English writer Charles Dickens as mentioned earlier. These days the Grade II building hosts wedding and functions, it also provides accommodation and serves Dickens Delight afternoon teas. I would love to stay there sometime or maybe have tea. From the website the interior looks so pretty and genteel and the sea view is divine.

If you have never visited before, I would recommend the History Stroll which would allow you to take in the cites of the town such as Eldon Place and Chapel Place . Alternatively, there’s the Thanet Coastal Path Trail, if you are more adventurous.

Herne Bay which is a roughly 30 mins way is certainly worth visit. Herne Bay is know for swimming, but did you know you could fossil hunt there as well! I think that would an excellent inclusion for a road trip weekend. 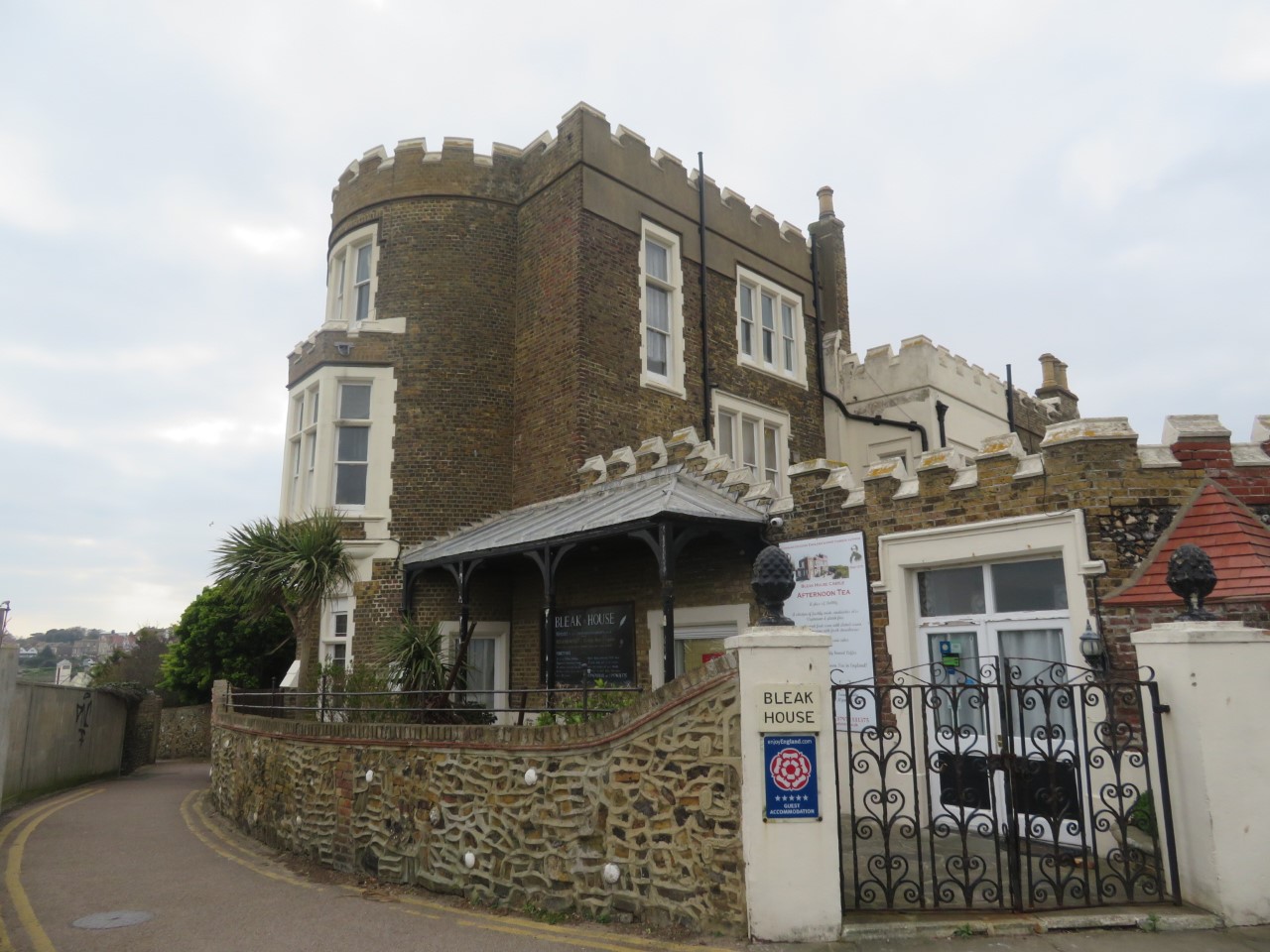 Before heading heading off to Canterbury for we evening, we went had a whistle at Botany Bay. From there you can take coastal walk to Broadstairs or Margate.

Viking Bay Beach, Broadstairs is definitely worth a visit. It’s probably best enjoyed during the warmer months, if like me you are not one for cold sea breezes. Have been or live near there? What are your recommendations for visitors?

More pics on Insta and Facebook, if you want to see more of the sites search hashtag #tttonstaycation . 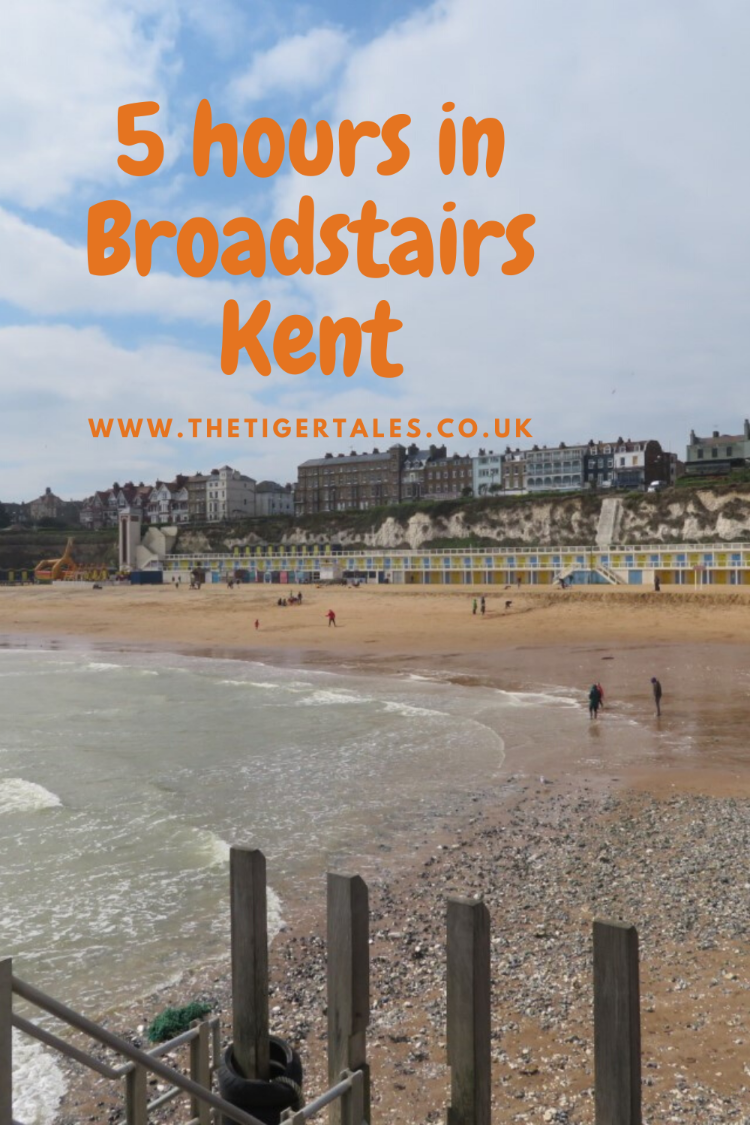